Migrate from Bitcomet to uTorrent

I finally decided to give uTorrent another try and switched from my favorite client Bitcomet to it. It seemed to me lately that Bitcomet was using more system resources than before which has been my main incentive to try out the uTorrent client again.Another reason is that Bitcomet is seen by many as a bandwidth stealer due to the options it makes available.

Migrating torrents to uTorrent is a pretty simply procedure. Before you can load them into uTorrent you have to make sure that all extensions that have been added by Bitcomet, or any other client, are removed. Bitcomet for instance adds .bt! at the end of every file if you have selected it in the options. This can be a tedious task if you have many small files that you want to download.

I found a dos batch file in the uTorrent migration guide that is helpful in this case. 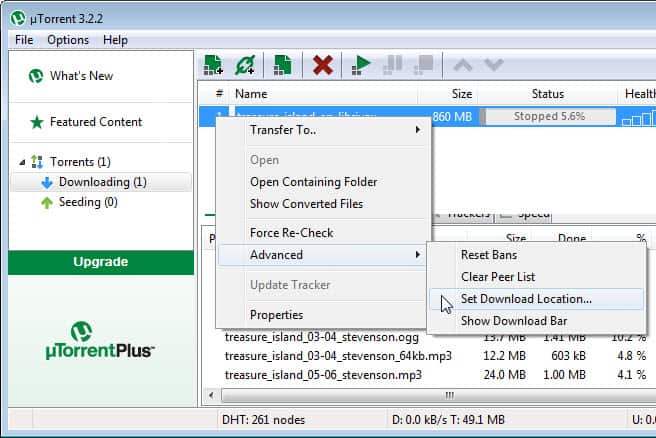 I decided to use the same download dir in uTorrent that I have used in Bitcomet. To change the download location click on Options, Preferences and select Directories from the menu.

Select the directory where your files are currently located in the Put new Downloads in field to make sure that uTorrent finds the partially downloaded files.

After the preparations are finished we have to load the torrents into uTorrent. Bitcomet has a subdirectory named Torrents in its program directory. The torrents are located there by default. Open uTorrent, click on File, Add Torrent and browse to the location where your torrent files are stored. You can alternatively select them all and drag & drop them into the uTorrent interface.

You can select multiple files at once. The torrents are automatically loaded into uTorrent and you should see the Done % go up if you already downloaded part of it with Bitcomet.

And that's it. You successfully migrated from Bitcomet to uTorrent.