Enhance your desktop with Samurize

The classic Windows desktop looks really boring, you can set a background image, edit some icons and enable some effects and that is about it. The free Samurize application has actually two benefits. First it is a system monitor, it displays information about your system, information that you specify like free disk space, your current IP address or weather forecasts. Besides that it enhances the desktop by applying a skin to the windows system. Take a look at the two examples below.

First you download Samurize from the homepage, then you decide which additional files you want. Categories include language files, graphics and skins (like new icons, images) and scripts & plugins (headlines, weather module, system information, visual plugins and the like).

This way you build your own custom system based on the files provided. You are free to create your own scripts and plugins, add your own background images and icons and the like. Very flexible system which you need to spend some time on to understand what's what and how to do things properly. Once you get the hang you are free to create a customized system. 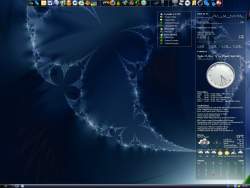 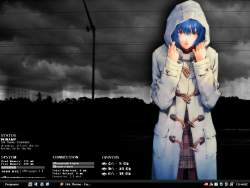 The first thing that you need to download is the Samurize main client, and once you have done so and installed the program on your system, you can download additional plugins or skins for the program to modify and customize it. The modules are available in the download section, with nearly 500 different scripts and plugins, and more than 200 skins available for download at the site.

The latest version of Samurize has been released in 2007 which indicates that the program seems to have been put on hold. An alternative is Rainmeter which provides a similar feature set and is regularly updated. Among the features are support for various skins and plugins that users can install quite easily after Rainmeter has been installed on the system.