The idea behind Facebook Stories is simple: Some of the 950 or so million Facebook users, minus the ten percent fake accounts, must have used the site for something deeper than playing games, listening to music or posting status updates. It appears to be an attempt to prove that Facebook is more than that, and that the site can be used for life-changing extraordinary activities as well.

If you now thought that you would only see celebrities lined up on the Stories website then I have to tell you that you are wrong about that.Â  When you look closely, you will notice that the bulk of stories are about regular people that happen to be Facebook users. There is a story about a Facebook group from Guelph Ontario that tries to save a landmark building in the city, and one from a user who lost all of his memories after an accident who is using Facebook to piece together part of his past life. If you are particularly interested in these kind of stories, then you will feel right at home on the website. 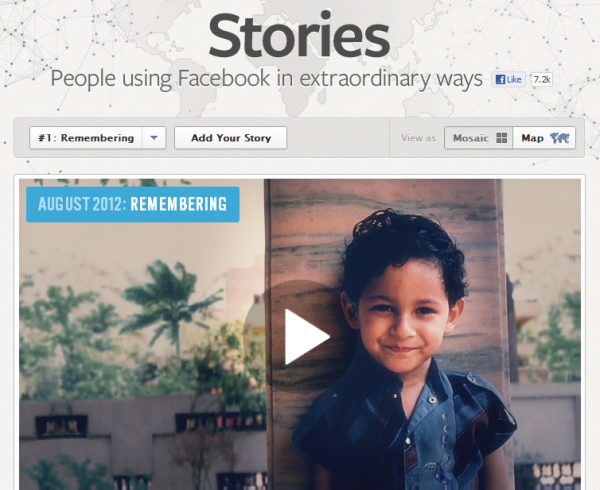 Facebook obviously has its own agenda when it comes to the site, and if you think that all the posted stories make Facebook seem kinda great, then you may have found the core reason for the site's creation. While marketing certainly has played an important role in the creation of Facebook Stories, there may be more behind the site than that.

Facebook for one zooms in on particular members of the site, or groups, and puts them into the spotlight, something that the company has not done before in large scale. This may help some of the users or groups to get the publicity they need to succeed.

Facebook plans to offer monthly features as well on the site. Each month an author will highlight books that fit the month's theme, and a musician will make available a playlist on Spotify.

All Facebook users are invited to submit their stories to the site, as long as it includes an extraordinary way Facebook has been used. Good stories like finding your long lost dog companion after ten years on Facebook via the site's people you know feature may then be featured on the Facebook Stories website where they are made available to a large audience.