The software developer released an international version of the Microsoft Office add-on just recently which added German, English, Italian, Spanish, French and Portuguese support which means it can be used with those Microsoft Office versions as well.

The installation of the add-on is straightforward. It can be downloaded as an executable from the developers homepage. The setup installs the classic Office menu in the three Office programs Microsoft Word, Microsoft Excel and Microsoft PowerPoint. It is required that you close all open Office programs and tools before you run the installer.

The changes are visible immediately after installation and first start of one of the supported Microsoft Office programs. 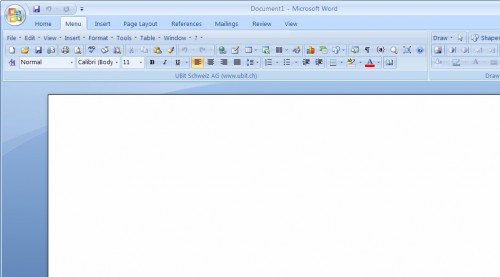 It should be noted that the Microsoft Office add-on Ubit Menu will leave the current Office ribbon interface as it is. It does add a new entry to that menu on the other hand called menu which combines all the menu entries known from Office 2003.

Depending on which version of Office you are using, you may be able to minimize the ribbon interface after installing the classic menu add-on. Try the shortcut Ctr-F1 first as it is used by all supported Office versions to hide or display the ribbon interface on the screen.

Additional information about that as well as a manual option if the shortcut is not working are provided on the Microsoft Office website.

Update: The developers have updated the classic menu add-on for Microsoft Office so that it is now also compatible with Office 2010, Office 2013 and Office 2016.

Users need to make sure that all program instances of Office are closed before the program installer is run, as it will mess up the installation otherwise.