TranslateLocally: local translations as an Extension and Desktop app

TranslateLocally is an open source browser extension and desktop application that promises local translations. It's source is the same that the official Firefox Translations extension uses: Project Bergamot. 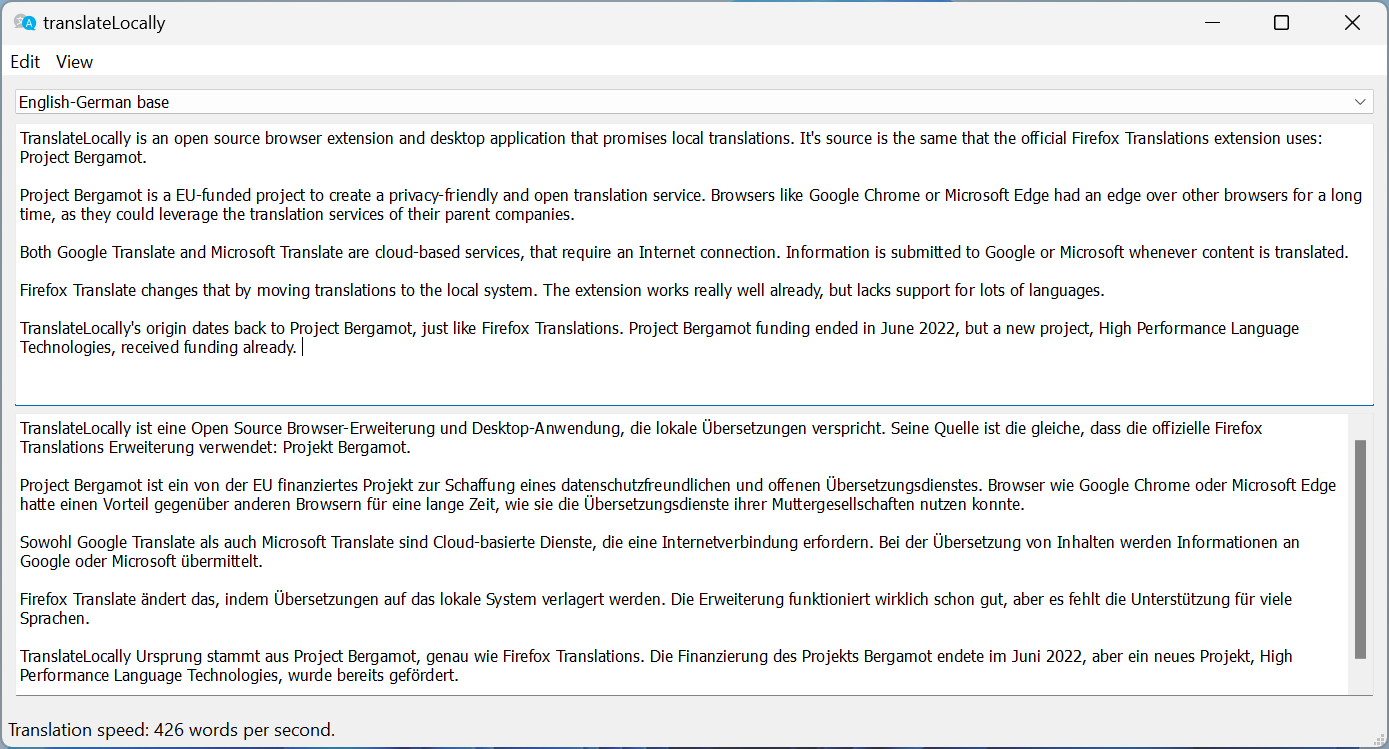 Project Bergamot is a EU-funded project to create a privacy-friendly and open translation service. Browsers like Google Chrome or Microsoft Edge had an edge over other browsers for a long time, as they could leverage the translation services of their parent companies.

Both Google Translate and Microsoft Translate are cloud-based services, that require an Internet connection. Information is submitted to Google or Microsoft whenever content is translated.

Firefox Translate changes that by moving translations to the local system. The extension works really well already, but lacks support for the majority of languages.

TranslateLocally is available as an extension for the Firefox web browser and as a desktop app. Since it is not as deeply linked to Firefox as Firefox Translations, it may in theory also be made available for other browsers. An experimental Chromium extension is already in development.

The desktop app is a standalone application that is available for Windows, Mac and Linux devices. It appears to be powered by Electron. Once started, it requires that you download at least one language pair to enable offline translation support.

The list of language pair that is supported is identical to that of Firefox Translations:

You may type or paste text into the upper text field to have it translated automatically by the program. All translations happen locally.

The TranslateLocally extension for Firefox may be used independently or in conjunction with the desktop app. It adds an icon to the Firefox toolbar that displays the translation options when it is activated. You may also right-click on a text selection to have it translated directly.

The extension works similarly to Firefox Translations, but there are differences between both implementations:

One of the interesting features of TranslateLocally, besides being able to translate individual words, sentences or paragraphs, is that it may work in conjunction with the desktop app, which improves the translation performance. Another advantage is support for importing other translation models, provided that these support Marian.

Firefox Translations development continues as well. The next version will introduce support for translating text selections. Both projects will benefit from the new EU project as more language pairs will be produced in the coming three years.

Should you use Firefox Translations or TranslateLocally? There is no definitive answer to that, as both offer features that the other does not offer. Support for the translation of text selections is a much requested Firefox Translations feature, but differences exist even after that feature lands.

Now You: which translation service do you use? (via Sören Hentzschel)