Get even more Windows cleaning done with Cleanmgr+ and Burnbytes combined

Cleanmgr+ was launched by its developer in February 2019 as a disk cleanup alternative as Microsoft revealed plans to deprecate the classic Disk Cleanup program of the Windows operating system to focus on cleanups in the Settings app.

BurnBytes was released in June 2020, and it too was designed to be a clone of the Windows Disk Cleanup tool. One of the main differences between the two programs is that BurnBytes is a community project.

The latest version of Cleanmgr+ includes BurnBytes, and an option to load an advanced version that combines both cleanup tools in a single interface.

All you have to do is download the latest Cleanmgr+ version from the GitHub repository and extract it to the system. Start the program, and you will get a new selection screen on start. Pick Cleanmgr to run the classic BurnBytes tool or Cleanmgr+ for improved cleanup options.

Added launcher, which allows you to run either the classic Disk Clean-up utility (here as open source replica with Storage Sense aesthetics built by Albacore and me called Burnbytes) or my extended version Cleanmgr+.

If you run Cleanmgr+, you will get an interface with two tabs. The first tab replicates the Disk Cleanup Tool of the Windows operating system; it allows you to clean Windows Update files, temporary Internet files, and other temporary files. 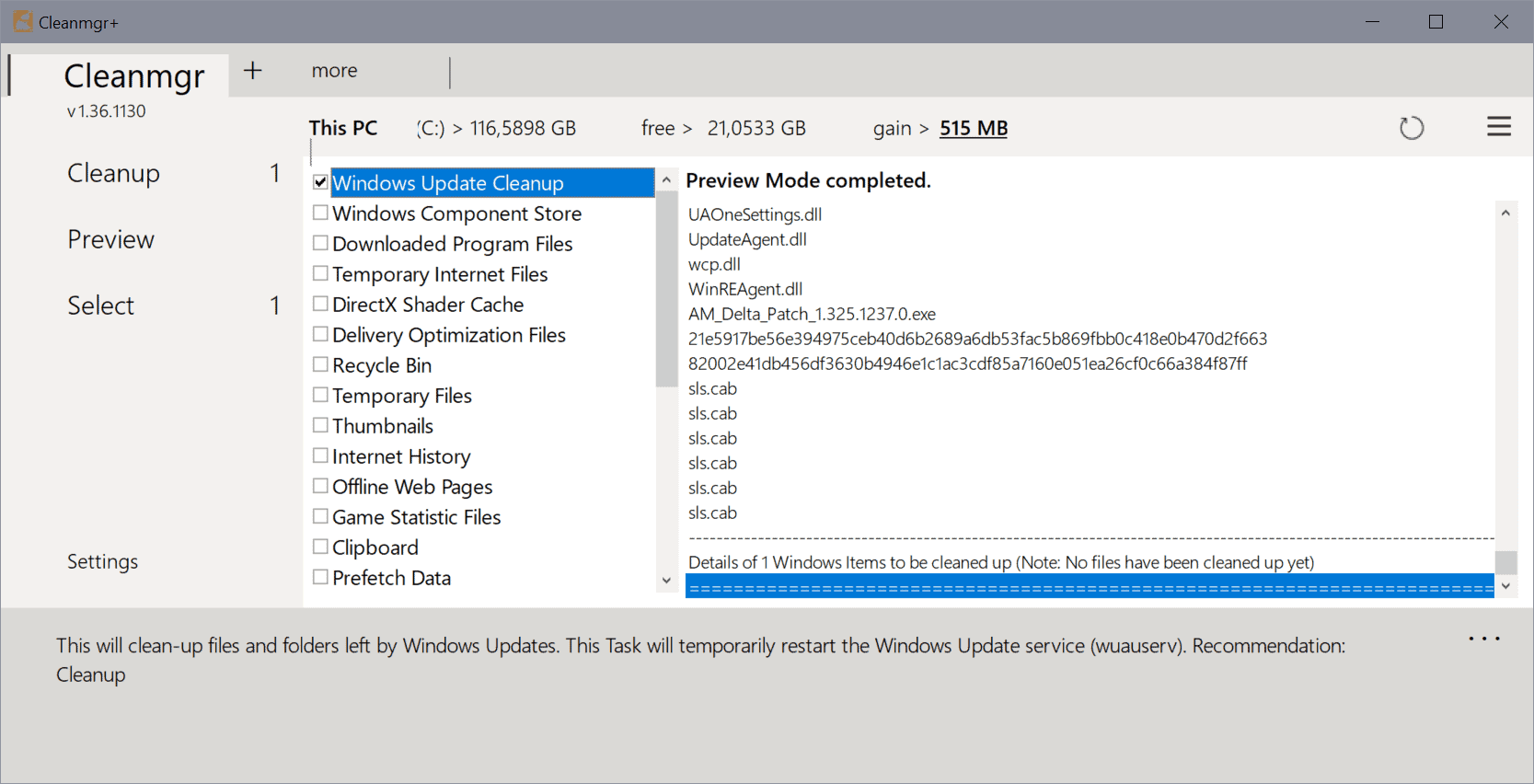 Check any of the options and hit the preview action button to get a detailed preview of what is going to be cleaned if you run the cleanup operation in earnest. It is a good idea to use preview first and check the output before you hit the cleanup button to have Cleanmgr+ delete the data in the locations.

Cleanmgr users who don't need the launcher can remove it by deleting the cleanmgr package in the bin/packages directory of the extracted archive.

It is a good idea to combine both cleanup projects into a single interface as it makes things a lot easier for users, and less confusing as well. If you like to use a dedicated tool for cleanup operations on Windows, this is one of the programs you should keep an eye on, especially if you run Windows 10 as the dedicated Disk Cleanup tool will be removed eventually.

One of the best uses of Microsoft's Disk Cleanup tool is that it supports the removal of previous Windows 10 versions. While you need to be certain that you don't want to go back to the earlier version, it usually frees up many Gigabytes of space on the system when run.

Now You: Do you use the Disk Cleanup tool? (via Deskmodder)

Article Name
Get even more Windows cleaning done with Cleanmgr+ and Burnbytes combined
Description
The latest version of Cleanmgr+ includes BurnBytes, and an option to load an advanced version that combines both cleanup tools in a single interface.
Author
Martin Brinkmann
Publisher
Ghacks Technology News
Logo

Previous Post: « Get Text Suggestions as you type globally when using Windows 10
Next Post: Microsoft is testing a startup booster for its Edge browser »