The end of uBlock Origin for Google Chrome?

There has been lots of talk about Google's proposed changes to the Chrome web browser's extensions system and how these changes would affect content blockers and other extensions.

The new manifest file for Chrome extensions could end extensions like uBlock Origin for the web browser. Google changed some parameters after it faced heavy user and developer criticism but did not revert the course completely.

Raymond Hill (gorhill), the developer of uBlock Origin revealed recently that Google rejected a new developer version of the extension. Developers upload new extension versions to the Chrome Web Store to replace existing versions; Google runs automated scans of these tools and may also look at the uploaded extensions manually before allowing or rejecting them.

In an email to the developer, Google stated that the extension violated one of the Chrome Store's policies that prohibits the bundling of unrelated functionality in extensions.

The email provides no information on the actual violation other than that, a practice that Google has been criticized for in the past.

Hill, a long-time developer, had no illusions that Google would provide actionable information about the rejection.

No point speculating one way or another, my experience with the CWS in the past is that we will never know why it was labelled "REJECTED", they never disclose the exact "why".

While there is still the chance that it will go through, it is more likely that it too will be rejected by Google and that this could effectively end uBlock Origin for Google Chrome.

Since the next uBO release will essentially be what 1.22.5rc2 is, consider that uBO is probably coming to an end of life in the Chrome Web Store -- there is no good reason to believe uBO 1.22.5rc2 would no longer be rejected with only changing the version number to 1.23.0.

Hill recommends that users find another browser that continues to support uBlock Origin if they want to continue using the extension.

The latest version of the extension is available for many major browsers including Mozilla Firefox and other Chromium-based web browsers.

It is impossible to know why the extension was rejected from the Chrome Web Store unless Google would provide further information on the issue. While it is certainly possible that the stable extension update would be allowed by Google, it seems more likely that it will be rejected as well by the company. 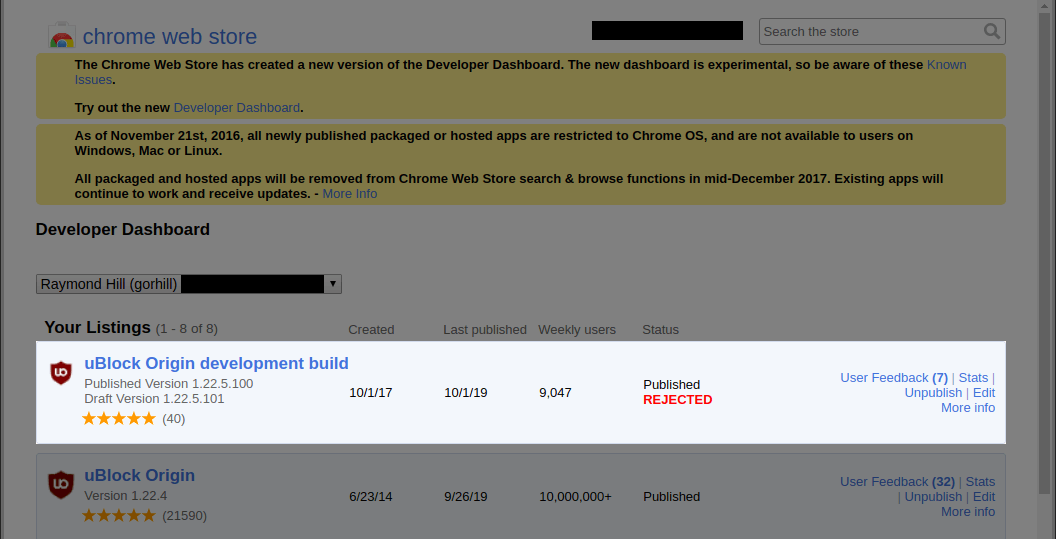