The first public version of the upcoming Manifest V3 for Chrome extensions is expected to be released in late July or beginning of August.

Google published an early draft of the new manifest for extensions in early 2019. The manifest defines what Chrome extensions can do and some of the changes in the draft caught the attention of extension developers.

Developers like Raymond Hill, best known for the Chrome content blocker uBlock Origin, noted that the initial draft could very well end ad-blocking extensions for the web browser. Other extensions, e.g. Tampermonkey, will also be affected by the changes.

One of Google's arguments for a particular API change was that content blockers could slow down the Chrome browser but a benchmark refuted the claim for the most part. Google has not published any benchmarks or data that confirmed the company's claim in this regard.

The company stated as well that the new API would improve privacy and security of Chrome users. 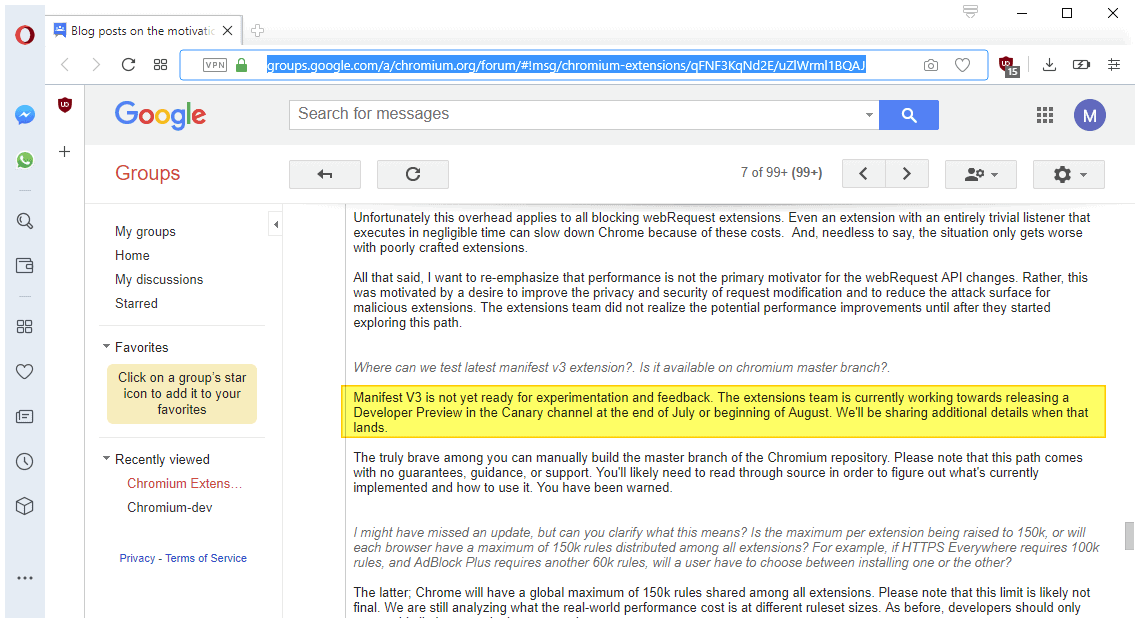 Google made some concessions, e.g. by raising the artificial limit of the controversial API to better accommodate ad-blocking extensions but remained on course.

Chromium Developer advocate Simeon Vincent confirmed on the Chromium Extensions forum that Google would launch the first preview of the new Manifest to the Canary channel in late July or beginning of August.

Manifest V3 is not yet ready for experimentation and feedback. The extensions team is currently working towards releasing a Developer Preview in the Canary channel at the end of July or beginning of August. We'll be sharing additional details when that lands.

Chrome Canary is the cutting edge development version of Google Chrome. While not mentioned in the post, it is likely that the new Manifest will be turned off by default and needs to be enabled using an experimental flag before it becomes available.

Most content blockers won't work properly when the change lands in Chrome Canary. The draft and some of its limits are not final, and developers are still trying to figure out if it is even possible to publish updates that use the new API without sacrificing functionality.

It will take at least six months before the change lands in Chrome Stable at the earliest; this would mean that Manifest V3 could launch as early as the beginning of 2020.

Most companies that produce Chromium-based web browsers have stated that they would not implement the API in this form or that their built-in content blocking capabilities would not be affected by the change.

Google made some adjustments to some of the parameters of the new API that is part of Manifest V3 but the overall change seems to be set in stone.

It seems unlikely that Google will modify Manifest V3  for Chrome extensions significantly at this point. The company may make changes here and there but seems hellbent on releasing the Manifest with the new API.

Now You: What is your take on the whole situation? (via The Register)