Firefox 69.0.3 will be released to the Stable channel later today. The new version of the web browser addresses two issues, a download issue and a Yahoo Mail issue.

Mozilla released Firefox 69.0.2 on October 4, 2019 and became aware of an issue affecting downloads for some users shortly thereafter. Users affected by the issue could not download any files using the browser; Firefox would place a 0-byte file in the download folder but would not download the actual file.

Mozilla's investigation revealed that the issue was limited to Firefox on Windows 10 devices and there only if parental controls were enabled. Mozilla implemented checks for parental control software as part of the DNS over HTTPS rollout in the United States. The organization disabled the new feature for devices with parental controls to avoid impacting the functionality of the software.

Background updates to Firefox 69.0.2 were throttled as a consequence and work on a patch began. Mozilla acknowledged the issue in the Firefox 69.0.2 release notes stating that "File downloads may not work for Windows 10 users with Parental Controls enabled ". 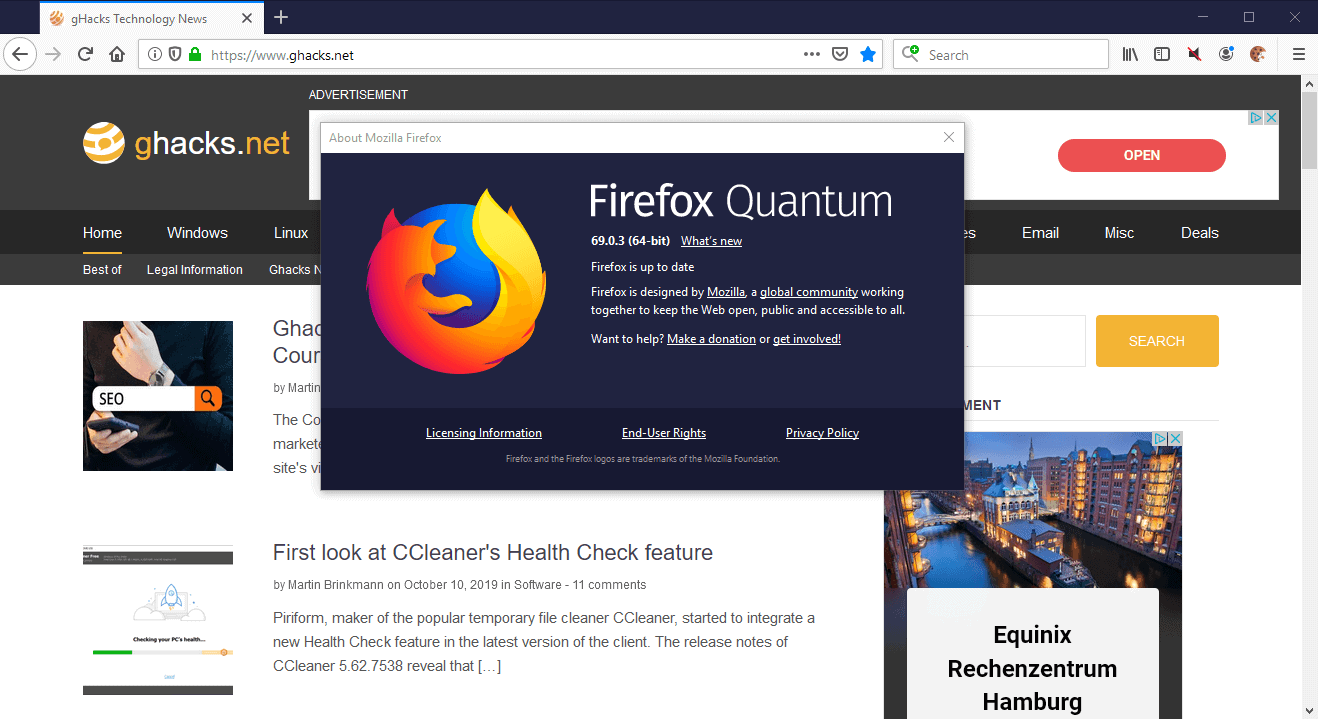 Firefox 69.0.3 fixes the download issue for affected users. Interested users can check out the official bug on the official bug tracking website to find out more about the issue and the patch.

Firefox 69.0.3 addresses another issue. Yahoo users who use the browser to access Yahoo Mail may have received download prompts when they clicked on emails in the Yahoo Mail web interface. Firefox's downloads manager would list the file "as.php" as the downloaded file on affected systems.

Firefox 69.0.3's official release date is October 10, 2019. Firefox users affected by the issue may run a manual check for updates once the browser is released officially to upgrade to the new version immediately.

All that needs to be done for that is to click on Menu > Help > About Firefox.

Mozilla fixed both issues in less than a week's time. Affected users may have downgraded Firefox to an older version to mitigate the issue for the time being. Firefox 69.0.3 fixes the issue and users should consider upgrading to the new version.

Now You: Did you run into these issues? What's your take on the new release?

Martin Brinkmann is a journalist from Germany who founded Ghacks Technology News Back in 2005. He is passionate about all things tech and knows the Internet and computers like the back of his hand. You can follow Martin on Facebook or Twitter
View all posts by Martin Brinkmann →
Previous Post: « Hide Private Mode for Firefox prevents private browsing mode detection
Next Post: Mozilla about to launch VPN beta »