Chrome 76: no more https or www in address bar

Google Chrome users who upgraded the stable version of the web browser to the recently released Chrome 76 version may have noticed that Chrome does not display https or www anymore in the browser's address bar.

Google made the change in 2018 for the first time when it released Chrome 69 but had to undo it after user outcry over the removed feature. Back then, Google decided to remove what it called trivial subdomains like www. or m. to display only the root domain in the address bar; this led to issues on sites that supported several of the trivial subdomains as it was no longer possible to look at the address to verify the active site.

Google called these subdomains trivial because it believed that most Internet users would not require the information.

Google did state back then that it would remove certain trivial subdomains again at a later point in time. It appears that the time has come, as Chrome 76 hides the www part of the domain name and the https:// protocol information from its address bar.

Check out how the Ghacks homepage URL is displayed in Google Chrome 76:

Chrome stripped https://www. from the address leaving just ghacks.net in the address bar. The lock icon does indicate that the site uses HTTPS but Google plans to remove it as well in the future.

You may wonder why Google decided to make the change. Google engineer Emily Schechter revealed Google's intention on the official Chromium bug page.

The Chrome team values the simplicity, usability, and security of UI surfaces. To make URLs easier to read and understand, and to remove distractions from the registrable domain, we will hide URL components that are irrelevant to most Chrome users. We plan to hide “https” scheme and special-case subdomain “www” in Chrome omnibox on desktop and Android in M76.

According to the post, Google believes that certain parts of the URL are distracting and irrelevant to most Chrome users.

Chrome users need to click twice in the URL bar to display the full address of the page. It is unclear why Google believes that clicking twice and not once is right when it comes to that but that is far from the only issue that users may experience once they upgrade to Chrome 76.

Users who try to copy just the domain part of an address will notice that Chrome adds the protocol and www. if used to the copied address automatically. There is no option to prevent this from happening right now; users who just want the domain need to process the copied text before they may use it as intended. 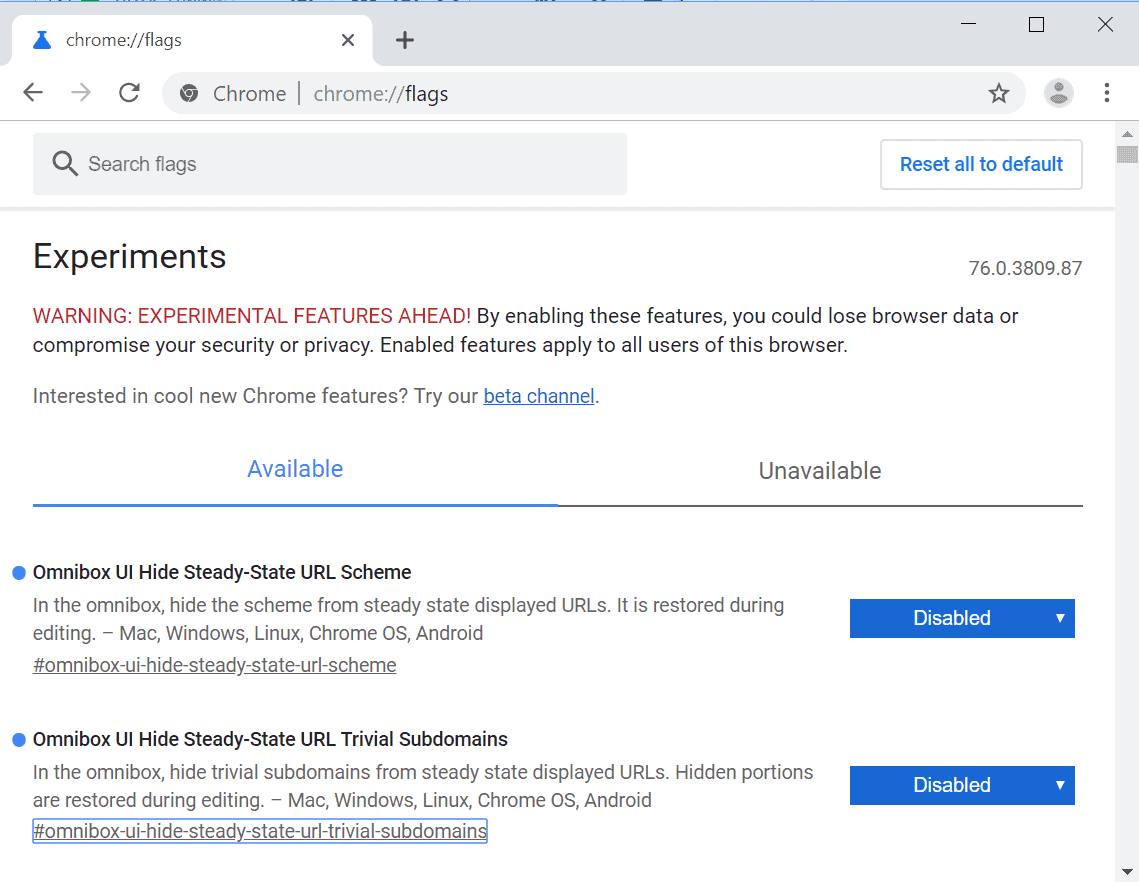 It is too early to tell if companies who use Chromium as the source for browsers will follow Google's lead. Browsers like Microsoft Edge, Opera, Brave, or Vivaldi all use Chromium and if developers don't make changes to the source code, will follow Chrome in displaying less information in the address bar.

Chrome 76 supports two experimental flags currently that reverts the change. These flags will be removed eventually from Chrome, however.

As far as I'm concerned, I prefer if browser's display all information and both the protocol and the www subdomain are vital parts of the address and should not be hidden; especially so if the hiding may lead to confusion or problems.

Google seems intent to go forward with the change on desktop and on Android. Unless there is an equally large outcry about the change, it is unlikely that Google will revert it for a second time.

I think that Google is just starting with pushing certain changes in Chrome and most of the web, and not all of them are in the best interest of Internet users.

Now You: What is your take on the change? (via Bleeping Computer)

Previous Post: « ClearURLs is an extension for Firefox and Chrome that deletes tracking information from URLs
Next Post: Get rid of all the clickbait YouTube video thumbnails »