The new Microsoft Edge web browser is based on Chromium, the same core that Google Chrome uses. It may identify as Chromium because of that and that should give it the same level of compatibility with websites and applications as Google Chrome.

Microsoft Edge may also identify as Microsoft Edge instead, however on select sites. One of the main motivations for doing so is Edge's improved support for media streaming sites like Netflix.

That's a big difference and one of the core advantages of Microsoft Edge. The new Chromium-based Edge offers the same advantage, as it includes Microsoft's own DRM solution for commercial media streams and Google's Widevine solution. 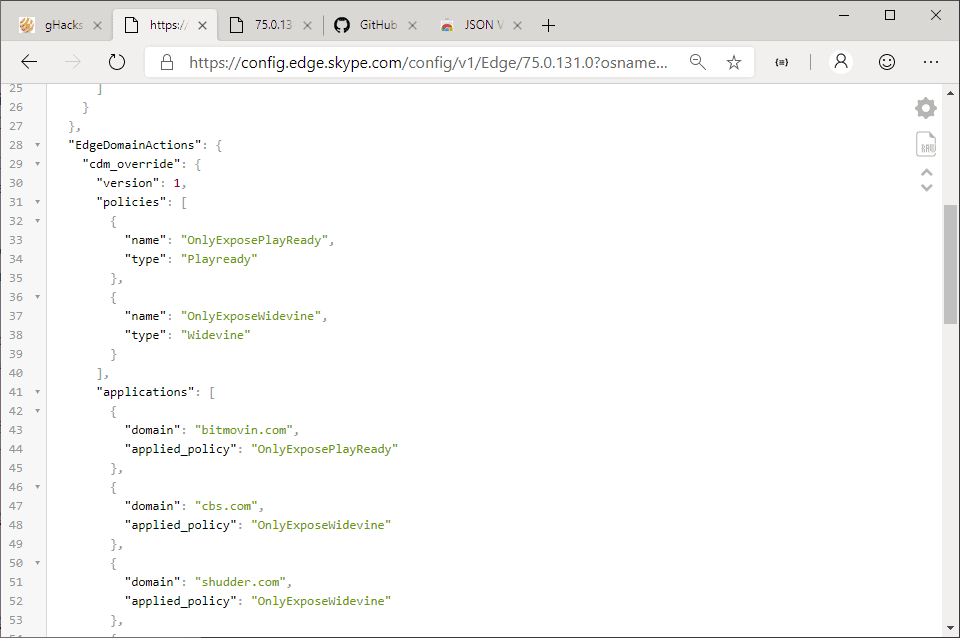 Bleeping Computer reports that the new Chromium-based Edge browser downloads a JSON file regularly from config.edge.skype.com (what is with that URL, Microsoft?) which matches certain domains to certain user agents.

When an Edge user connects to any of the sites mentioned in the configuration file, e.g. netflix.com or hbonow.com, Microsoft Edge applies the user agent that the JSON file assigned to the site. In the case of streaming media sites, it is identifying itself as the classic Edge browser:

For Facebook and Messenger, it identifies as Google Chrome specifically:

and for most sites, using the default user agent:

The JSON file has a section that overrides exposure of DRM plugins. Edge may restrict exposure to one of the supported DRM plugins on select sites. It does so for CBS, Shudder, TVnow, Bitmovin and Sling currently, and exposes only Google's Widevine to these sites.

Why is that done?

Microsoft has not published any article or information on Edge's user agent changing capabilities. The most likely explanations are compatibility and functionality. Microsoft picks the classic Edge browser to unlock high quality streams on certain media streaming sites, Google Chrome when the user agent offers advantages, and the default user agent of the browser on the majority of sites out there.

User Agent switching is another advantage that Microsoft Edge has over Google Chrome.

Now You: Have you tried the new Edge? Did you like it?

Martin Brinkmann is a journalist from Germany who founded Ghacks Technology News Back in 2005. He is passionate about all things tech and knows the Internet and computers like the back of his hand. You can follow Martin on Facebook or Twitter
View all posts by Martin Brinkmann →
Previous Post: « Adblock Plus filter exploit to run arbitrary code discovered
Next Post: Promo: Social Media image resizing has never been easier »