by Martin Brinkmann on April 11, 2019 in Internet Explorer - 9 comments

One of the things that I missed in current versions of Microsoft's Chromium-based Edge browser was native translation support.

Microsoft released previews of the Chromium-based browser this week; previews are limited to Windows 10 officially (even though there is an option to install the Windows 10 installer on previous versions of Windows) and the Dev and Canary channels.

The upcoming web browser is still in a pre-release development phase. While it works just fine as it is, certain features are missing currently. Microsoft revealed some, e.g. Spellchecking support, when it announced the availability of the first public builds of the Chromium-based Microsoft Edge browser.

It was not clear up until recently if the new Microsoft Edge would support native translations or if users would have to install the Microsoft Translator extension instead for that.

Note: We file this under rumor for the time being as we cannot verify integration of Microsoft's translate feature in the browser at the time of writing. We will update the article when that happens.

Microsoft did add native translate functionality in the Android version of the Edge browser in 2018 however.

Microsoft Edge Canary is the cutting edge version of the browser that gets updated daily according to Microsoft.

Microsoft Edge displays a translate icon in the address bar when it detects that a web page is not in the system language (maybe also not in any other installed language on the system).

A click on the icon displays options to translate the page into another language similarly to how Google Chrome handles native translations. It is possible to check the "always translate pages from" box to automate translations from that language whenever pages are loaded that are in that language.

The main Edge menu lists a "Translate to" option as well, and the settings feature a new preference to enable or disable the translation feature in the Microsoft Edge browser.

Microsoft needs to get the first public release version of the Chromium-based Microsoft Edge browser right, and that includes integrating popular features natively in the browser and offering features that Google Chrome does not offer.

Translation is a useful feature, especially when it is integrated in the browser. While not mentioned by users who can use the feature already in Edge Canary, it is Microsoft's own translation service that Edge uses for these translations.

Now You: What does the Chromium-based Edge need to become more successful than the classic Edge? 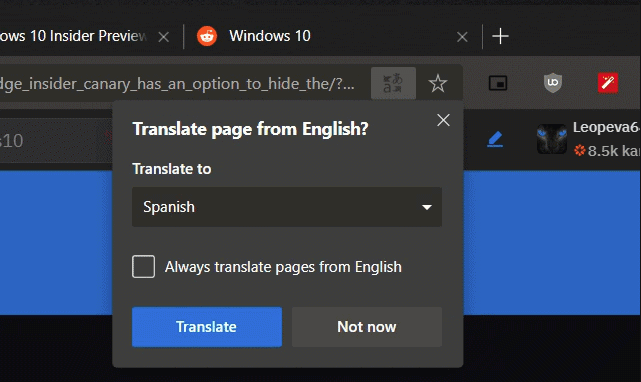 Previous Post: « Microsoft disabled or replaced these Google features in the new Edge
Next Post: These Extensions are exclusive to the Chromium-based Microsoft Edge »