The Firefox Nightly Updater is broken right now! Do this to fix - gHacks Tech News
ghacks.net

The Firefox Nightly Updater is broken right now! Do this to fix

Firefox notifies users about updates; the small overlay gives users options to start the update process. The process is broken in Nightly, however.

Firefox Nightly displays the "A new Nightly update is available" notification on start. Activation of "Download Update" has no effect in affected versions of Firefox Nightly. 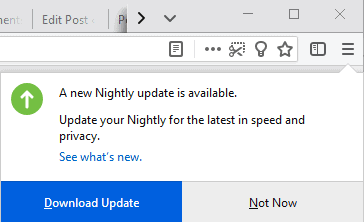 Firefox users who check for updates manually in the browser, by opening Menu > Firefox > About Firefox, are notified on the "about" page that an update is available. Activation of the update to button does nothing, however. 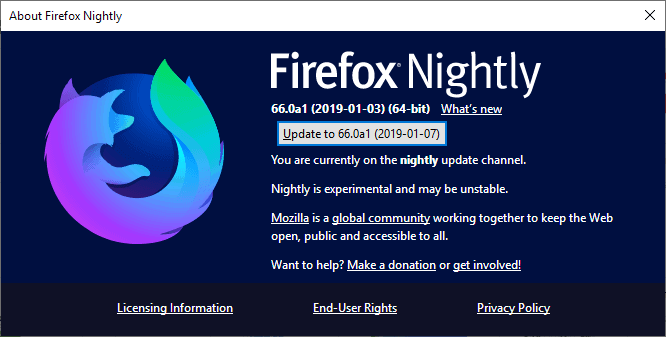 Mozilla is aware of the bug; it is filled under 1517718 on Bugzilla: Firefox Nightly gets an infinite spinner when checking for updates.

Firefox users report two different but related issues. Some users get an infinite spinner when checking for updates, others get the update but cannot apply it to the web browser.

Affected users have two options: resolve the issue manually by installing the current Firefox Nightly installation over the existing one, or wait to see if Mozilla fixes the issue.

The manual fix for the issue is straightforward:

The installer copies the new version over the old; just make sure that you install it in the same directory on Windows. The new version that is available is fixed and new updates that Firefox Nightly picks up should get downloaded and installed again without any issues.

Firefox Nightly is a cutting edge development version of the web browser. The version is surprisingly stable for what it is; I used the browser for years and ran into less than a handful of issues in the past.

Article Name
The Firefox Nightly Updater is broken right now! Do this to fix
Description
If you run Firefox Nightly on your devices you may have noticed that updates don't get downloaded and installed anymore.
Author
Martin Brinkmann
Publisher
Ghacks Technology News
Logo