You can check "My apps & games" section of the official Google Play application to find out if Play Protect detects security related issues on the device and when it last scanned apps on the device. It is furthermore possible to start scans with a tap on the reload button. 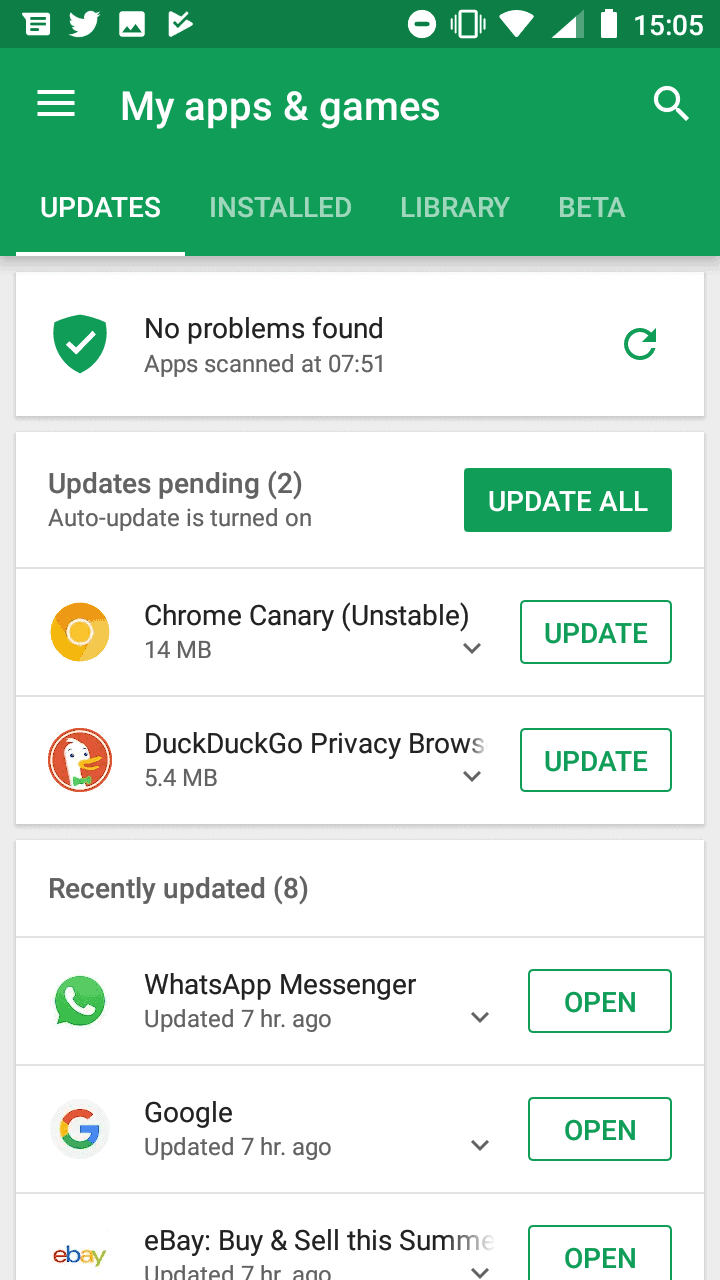 The institute checked 21 different mobile security products for Android from renowned companies such as Avast, Avira, Bitdefender, G Data, or Kaspersky against a set of 2945 of the latest Android malware threats and a set of 2709 malware samples discovered up to four weeks ago at the time of the testing.

Google Play Protect was the only solution that received 0 points in the protection category. It had detection scores of 70.1% and 49.4% against real-time malware and malware of the last 4 weeks. The average for all tested solutions was 97.4% and 96.7% respectively.

Only four antivirus solutions received test scores below the maximum score of 6. Google Play Protect was the only solution that did not receive any points; TrustGo Antivirus & Mobile Security received 2 points, iNetCop's OnVaccine 3 points, and Ikarus' Mobile Security 5.5 points.

All other solutions got maximum points in the protection category.

Google Play Protect fared better in the usability category where it received the maximum number of points. Most mobile security solutions received maximum points in the category as well as only 7 received a score less than the maximum of 6.

A high usability score is awarded when apps don't impact battery life, slow down device usage, or generate excess traffic, and when the number of false positives is low.

How did Google Play Protect perform in previous months? Not better: the solution kept its 0 rating in the protection category in all four tests AV-Test ran this year.

A quick check of the mobile security results for Android on AV Comparatives, another test organization, paints a similar picture. Google came in last with a protection rate of just over 50% at 51.8%. The second worst program had a protection rate of 92.3% and that only because of a bug in the software program.

The main takeaway is that Google Play Protect does not protect well against threats on Android. It reminds me a lot of how Microsoft's security solutions, Windows Defender and Microsoft Security Essentials, started.

Android is plagued by malware campaigns and while some protection is better than none, it is clear that Google Play Protect is not the best when it comes to protecting Android users from malware attacks.

Do Android users need another security solution then? It depends on device usage in my opinion; if you install lots of apps from unverified sources you may want to add extra protection to your device. If you use it to check Google Maps, the weather, and for chatting, the risk of being exposed to malware is relatively low.

Now You: Anti-malware apps on Android, yes or no?

Martin Brinkmann is a journalist from Germany who founded Ghacks Technology News Back in 2005. He is passionate about all things tech and knows the Internet and computers like the back of his hand. You can follow Martin on Facebook or Twitter
View all posts by Martin Brinkmann →
Previous Post: « Microsoft Edge for Android gets translate functionality
Next Post: Enable the dark theme in the Android YouTube app »