Customers of the streaming service Netflix can choose between three plans right now: basic, standard, and premium. The plans determine the quality of the streams, the number of screens customers can watch Netflix on at the same time, and to how many devices they may download movies and shows to.

It appears that Netflix runs a test right now in Europe and possibly in other regions as well that unlocks a fourth plan.

The Ultra plan, that is how Netflix calls it right now, is the most expensive plan up to date. The pricing fluctuates but it seems to be anywhere between €16.99 and €19.99 per month.

Netflix's current plans go for €7.99, €10.99, and €13.99 respectively. In other words, the Ultra plan is available for €3 to €6 more than Netflix's premium plan. Cord Cutting reports that the price changes depending on the browser that is used. While that is one explanation, it can also be the case that Netflix uses A-B tests and selected different prices for the customer based on that.

You probably wonder what sets it apart from the Premium plan on Netflix. The only difference appears to be that it supports High Dynamic Range (HDR) while all other plans on Netflix don't support the feature anymore according to the listing.

The change may come as a surprise as Netflix states on its website that all four screen Netflix plans support HDR (Dolby Vision and UltraHD Premium). Netflix customers can change the video quality according to their needs but only up to the quality supported by the subscribed plan.

All other features, at least those displayed on the plan selection page on Netflix, match the Premium plan (meaning you get HD and Ultra HD, and access on four screens).

Cnet reports that some Italian customers of Netflix reported that Netflix halved the number of screens that customers can watch streams on simultaneously.

The change is probably part of an A-B test and it is unclear at this point in time whether the changes will be implemented in this form, in a different form, or at all.

The change seems to affect new customers only at the point in time. Not all get the new Ultra option but it is clear that Netflix could introduce the plan for new customers which would pay more money per month for the same set of features that Netflix's Premium plan provides right now.

Netflix's testing of limiting the functionality of its other plans to make the new Ultra plan more appealing is a tactic that may make sense from a business point of view but it is not really clear why the company is not simply testing a price increase of its Premium plan instead as it supports all the features of the Ultra plan at this point.

Now You: are you a Netflix customer? Which plan are you subscribed to? 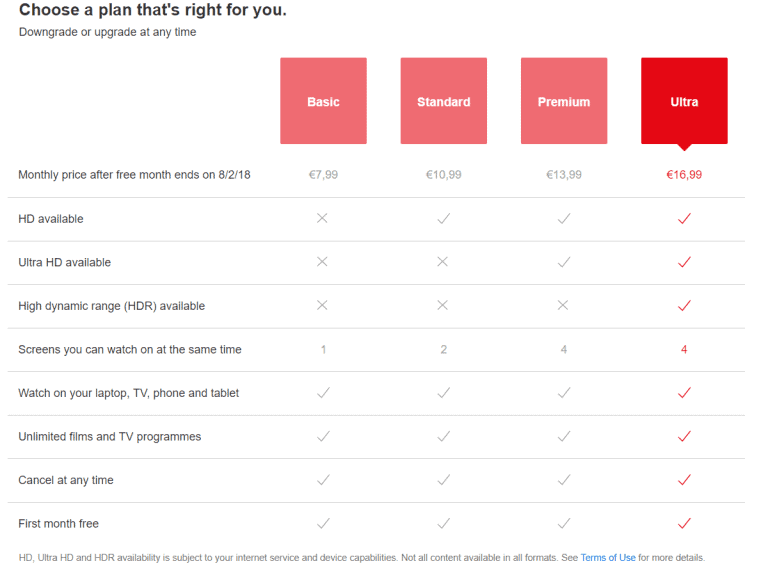