Netflix enabled a download option in the official Netflix application for Android and iOS mobile operating systems a couple of days ago.

I thought that this was a really cool option, considering that you could download shows or movies at home using Wi-Fi, to watch them elsewhere where the reception is not as good or not available at all.

Think of an eight hour or longer flight. Yes, the shows and movies of the in-flight entertainment system may be nice, but what if you could watch your favorite show instead on your Android or iOS device?

Anyway, I tried the new Netflix app version and realized that it did not show the download button. While the app version was the one Netflix released on the day it made the announcement, all options related to downloading shows or movies for offline watching are not available.

First thought that it might have something to do that I rooted the device, or that it was a server-side roll out of the feature.

I found a couple of suggestions online, like clearing the application cache or removing the app and installing it again. Those did not work in my case, and I noticed that other users were having the issue as well.

Tip: I suggest you verify download options by loading The Crown TV show as it supports downloads. Not all shows or movies support downloads on Netflix right now.

Why you cannot download Netflix titles to your device 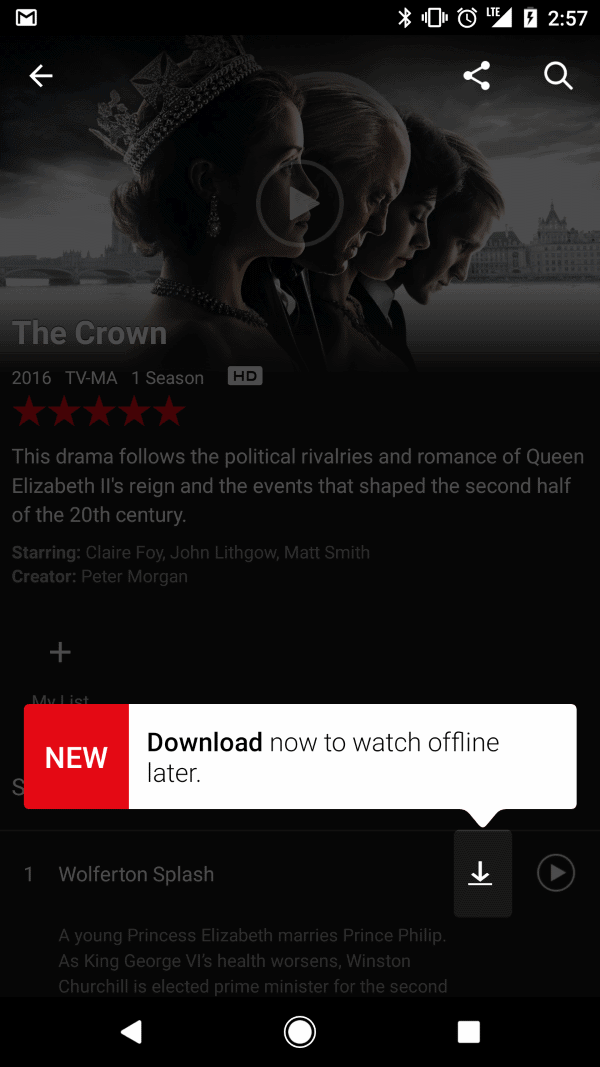 While Netflix did mention that the feature is included in all plans and available worldwide, it never mentioned that it is available for all devices.

If you open the Netflix support site, you find out that you need iOS 8.0 or later, or Android 4.4.2 or later for the download feature to work.

If you read on, you will come to another restriction that the company did not mention in the announcement:

Android devices must be able to stream Netflix in HD to select video quality. Visit our article about Android for more information about HD capable models.

Check the list of Android devices that support HD officially to see if your device is listed on it. Mine is not, and that is the reason why I don't see the download option.

Now, the list is not complete. The Samsung Galaxy S4 is not listed on the page for instance, but users can download Netflix titles using it.

Chance is high however, that if you have a phone released by a Chinese company, say Xiaomi or Huawei, that you may not be able to use Netflix's download functionality right now.

Unless Netflix starts to enable the functionality for more devices, there seems little that you can do to enable downloads on Netflix.

Now You: Have you tested the feature? Did it work?