Alex Kontos, the developer of the Firefox fork Waterfox has released a test build of version 56 of the web browser to the public.

Update: The final version of Waterfox 56.0 is now available.

Waterfox 56.0 is a major new release as it paves the way for future versions of the web browser. The release marks the beginning of a transition period that moves Waterfox to the Firefox ESR branch.

Firefox ESR, Extended Support Release, is a special version of Firefox designed for organizations and users that can't or don't want to upgrade to a new version every six or so weeks.

Moving Waterfox development to Firefox ESR buys some time to develop a new version of Waterfox that combines some of the strengths of classic Firefox with the functionality of the new Firefox.

In short, the future version of Waterfox will support XUL and XPCOM, and as such legacy add-ons, but also new technologies such as WebExtensions or the multi-process architecture. 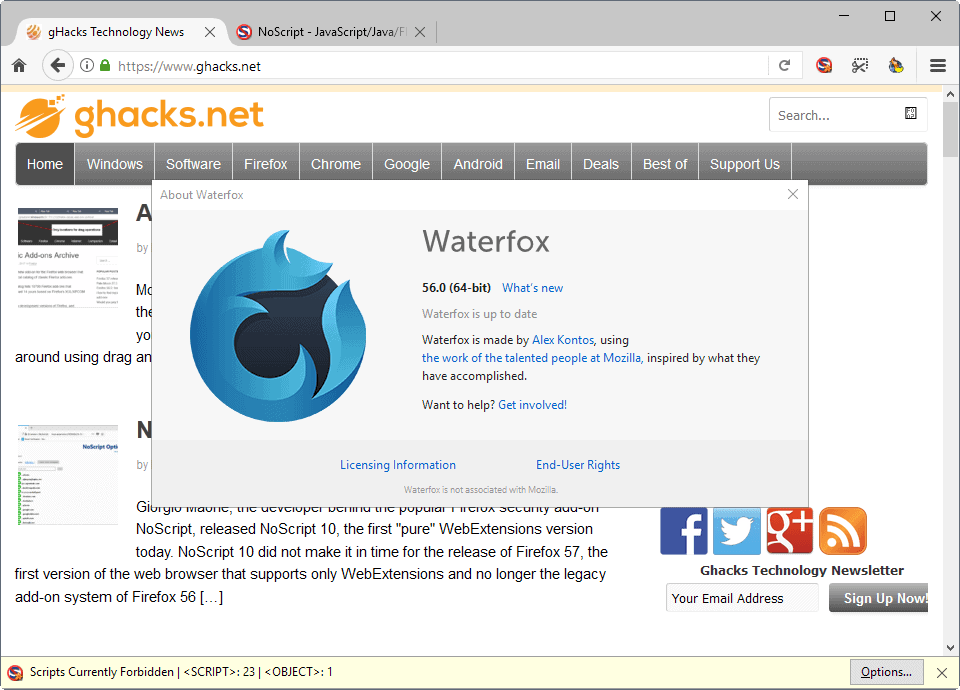 Waterfox 56.0 is based on the Firefox 56.0.2 release, and includes the security patches of Firefox 57.

Alex posted a to-do list, community requests and project goals on Reddit that has some unique feature listings. Here are my favorites from the list that he posted:

One interesting tidbit that you find listed there is that Alex looks into implementing a private network similar to VPNs as a way to potentially finance the development of Waterfox.

Waterfox users who would like to try the new build can download it from the Reddit thread. Users who don't want to help with the development may want to wait until the final version of Waterfox 56.0 is released instead.

Alex Kontos' Waterfox plans are very ambitious, and it remains to be seen if he can drum up enough support -- development, financial and other -- to not fall behind too much.

If he succeeds, Waterfox will support Firefox legacy add-ons and new features that Mozilla introduced and introduces in recent versions of the browser. This could boost the attractiveness of the browser significantly.

Article Name
Waterfox 56 Test Build is out
Description
Alex Kontos, the developer of the Firefox fork Waterfox has released a test build of version 56 of the web browser to the public.
Author
Martin Brinkmann
Publisher
Ghacks Technology News
Logo