Vivaldi Technologies AS released a new version of the company's Vivaldi web browser today; Vivaldi 1.13 comes with a new Window panel and download improvements, but the main focus of the release was stability and the fixing of browser regressions and issues.

Installed copies of Vivaldi should pick up the update automatically thanks to the browser's built-in automatic update system.

You may run a manual check for updates by selecting Vivaldi > Help > Check for Updates. The new version of the browser is also available as a download for all supported operating systems -- Windows, Mac and Linux -- on the official Vivaldi website. 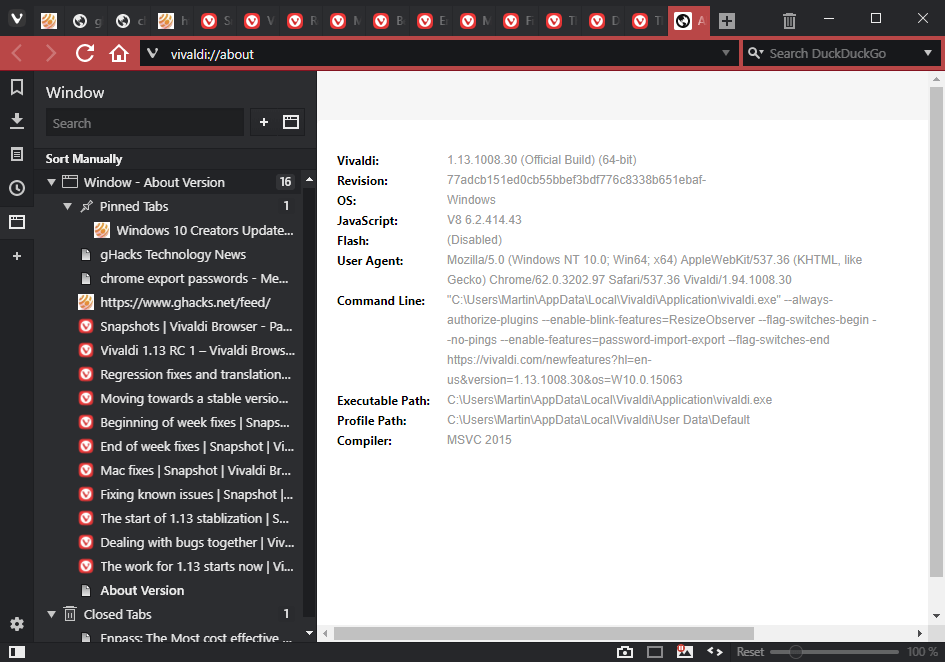 The new Window panel improves the handling of multiple tabs in Vivaldi. It is a new option in Vivaldi's ever growing list of sidebar items that you can enable or disable individually.

You may need to click on the sidebar icon displayed in the leftmost position on the browser's status bar, or use the keyboard shortcut F4 instead to display it.

Select Windows from the listing afterwards (hover over the icons to locate it, it was the one just above the + icon on my system) to launch it.

Windows displays all open and recently closed tabs in the panel.  Tabs are sorted by the windows they are associated with, and a click on any jumps directly to the tab. You can drag tabs to change the order in which they are displayed in the browser's tab bar using drag and drop operations. 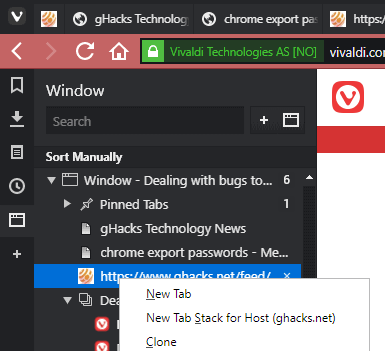 You may run other operations using the Window panel. You

More interesting than that, probably, is the option to create tab stacks easily from a selection. You have two main options to do that: either right-click on any tab to create a tab stack based on the domain name, so that all instances of tabs of that domain are merged into a single tab stack, or, select tabs individually, to create a tab stack using all selected tabs instead.

You need to right-click the selection or tab, and select the "new tab stack" option to do so. Other options provided include:

The window panel's functionality is limited to individual browser windows right now. Vivaldi plans to improve the feature in future versions of the web browser however. 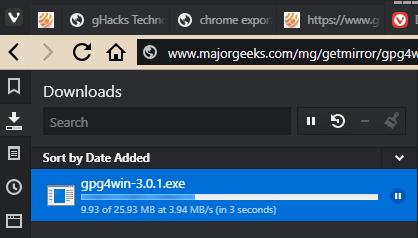 The development team of the Vivaldi browser improved the file downloading functionality of Vivaldi. Some features that have been added in Vivaldi 1.13 are catch-up features that other browser's support already. This is the case for a new warning dialog when closing the browser while downloads run.

Vivaldi 1.13 furthermore supports pausing and resuming of file downloads, and the display of the download speed in the downloads interface.

A major development focus was the fixing of issues in Vivaldi 1.13. Most snapshot posts by the Vivaldi team highlights fixes only. Here is a list of some important ones:

Now You: What's your take on this new Vivaldi browser version?

Martin Brinkmann is a journalist from Germany who founded Ghacks Technology News Back in 2005. He is passionate about all things tech and knows the Internet and computers like the back of his hand. You can follow Martin on Facebook or Twitter
View all posts by Martin Brinkmann →
Previous Post: « Waterfox 56 is out
Next Post: How to protect yourself from Session Replay tracking »