CompuServe forums will be shut down in December - gHacks Tech News
ghacks.net

CompuServe forums will be shut down in December

CompuServe was the first major online service provider in the United States before AOL took over the company's position. AOL acquired CompuServe eventually, and shut down most of the other company's operations.

CompuServe stopped providing Internet Provider Services for instance, and popular services such as OurWorld Web pages were taken offline as a consequence.

The CompuServe forums on the other hand remained a thing, albeit not as popular as the forums during the golden age of the service.

AOL on the other hand was acquired by Verizon, and is now part of Oath together with the remains of Yahoo.

When you visit the forums right now, you are greeted with a pinned message stating that the forums will be shut down on December 15, 2017. 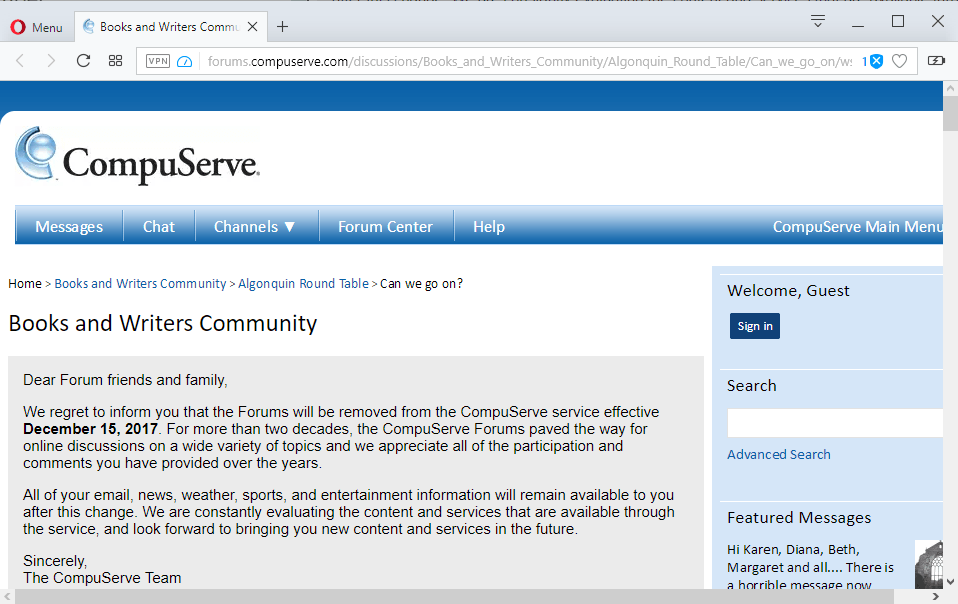 Dear Forum friends and family,
We regret to inform you that the Forums will be removed from the CompuServe service effective December 15, 2017. For more than two decades, the CompuServe Forums paved the way for online discussions on a wide variety of topics and we appreciate all of the participation and comments you have provided over the years.

While the forums will be removed from the CompuServe service on that day, CompuServe email as well as news, weather sports and entertainment information won't be. These remain available through the service according to the announcement.

While the forums activity pales in comparison to sites like Reddit, it appears that it has attracted a dedicated group of users who frequent it regularly.

These users will lose access to the information posted to the forums. There does not seem to be an option to export data. What users could do however is use a program to mirror the site before it goes offline. A program like HTTRack should do the trick.

The shut down of the CompuServe forums is probably another casualty of the merging of services under Oath. Neither Verizon nor AOL have issued a statement yet in regards to the closure however. (via Fast)