Blend photos together with Image Inc for Windows

Image Inc is a free software program for Microsoft Windows devices that you may use to blend two photos together.

The core idea behind the program is to provide a simple to use alternative for professional grade software programs such as Adobe Photoshop that may be used for the same purpose (and a lot more of course).

The program has not been updated in a while. The last update dates back to 2014, and supported versions of Windows are Windows XP, Vista and Windows 7 only officially. Image Inc worked fine on a Windows 10 Pro system however. 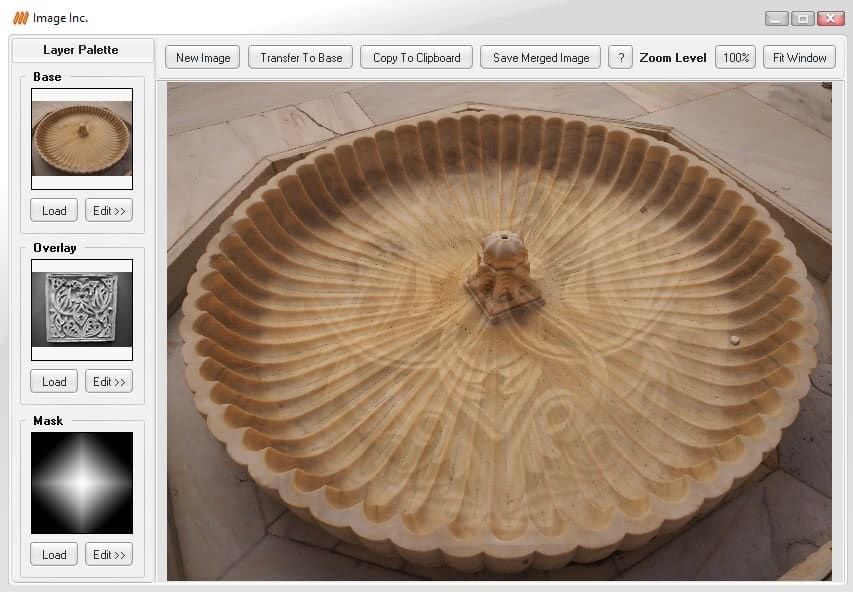 The process of blending two photos together is as simple as possible. Load the base photo first, then the overlay photo, and pick a mask as well, and you are done.

While that is all there is to it at its core, you get edit button next to each step of the process to edit the photos or masks.

The base photo options are somewhat limited, you may rotate the image, flip it, convert it to grayscale, or invert the image.

The same editing options are provided for the overlay photo. Options to change the layer blend mode, the layer opacity, and selecting tile image instead of stretch to fit are provided here as well.

The mask options list some presets that you may load on top of the options that are provided for the base image.

Any change you make under edit is reflected right away in the preview area. It is usually necessary to play around with layer blend mode and layer opacity to get a good resulting image.

While that depends a lot on the base and overlay images, it is fair to say that getting it right by just loading the photos is usually something that is not going to happen. You may save the output image to the clipboard or save it to the local system instead.

Image Inc has a couple of use cases that may make it interesting to designers and home users: add edge and frame effects to photos, create texture overlays, or blend multiple photos together that fit well.

Image Inc is a simple to use program to blend two photos together. While it is not the most powerful image editor around, as it serves just that one purpose, if you need to blend images it may be faster than traditional image editing programs.

The customization options are not as extensive though, and the program itself cannot be used to create masks.

Martin Brinkmann is a journalist from Germany who founded Ghacks Technology News Back in 2005. He is passionate about all things tech and knows the Internet and computers like the back of his hand. You can follow Martin on Facebook or Twitter
View all posts by Martin Brinkmann →
Previous Post: « SepPDF: Split PDF documents on Windows
Next Post: Novabench 4.0 review: Windows benchmark software »