FastStone Image Viewer 6.3, a new version of then popular picture viewer for Windows, comes with a video player to play videos in the application.

The program is offered as a free portable version and as a version that you can install on a Windows machine. It is ad-free, and the installer is free from other nasty things such as adware offers. 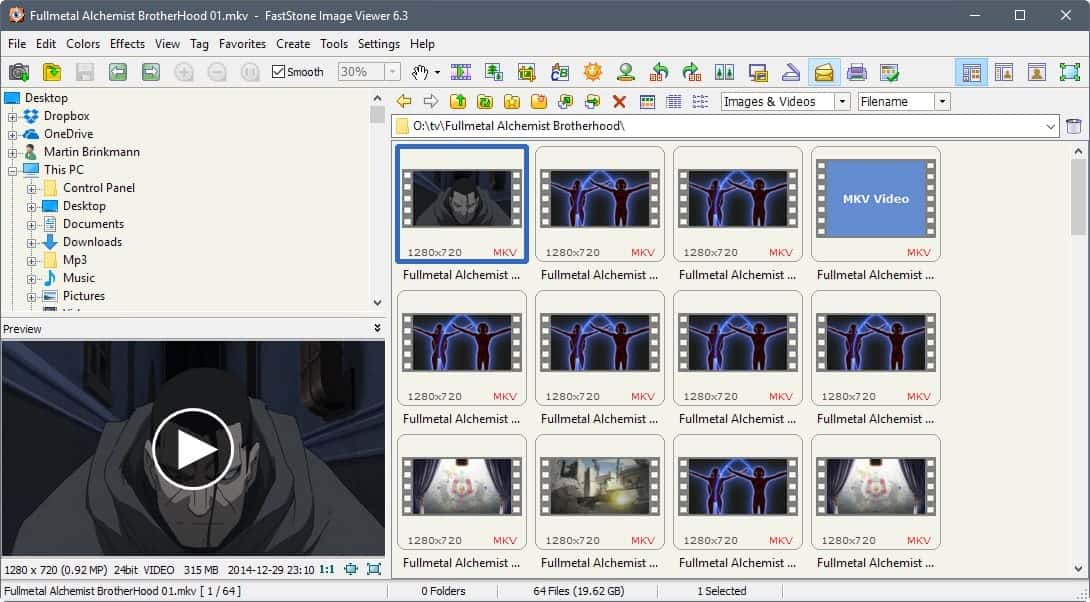 The big new feature of FastStone Image Viewer 6.3 is the built-in video player. This means that you may use the program now to view image and video files natively in the program interface.

One caveat is however that the video player relies on system codecs and does not come with its own set of binary codecs. What this means is that video formats are only supported by it if the code is available on the system.

That's the care for many popular format such as mkv or mp4, but not for other formats such as flv. If you want support for unsupported video formats, you need to install the codecs on the Windows machine using third-party distributions.

You know exactly if a format is supported or not as FastStone Image Viewer will hide all unsupported formats when you browse the connected hard drives and storage locations. If you get thumbnails, either in folders or when opening a folder that contains video formats the program supports, you know that the format is supported.

Each video file is listed with a thumbnail in this case along with basic information that include its type and resolution.

The selected file is displayed as a larger preview in the video player area as well. It highlights additional information, such as its size or date.

A click on the play icon starts playback right away in the program interface. You can click on the full screen button to play the video in fullscreen, or on the 100% or best fit buttons to adjust the playback area accordingly.

FastStone Image Viewer 6.3 comes with other improvements. The two that are noteworthy are improvements to the rendering quality of Draw tool annotations, and better support for high bitrate mp3 audio files in slide shows.

Still, support for video is certainly a welcome addition, and it is likely that the feature will receive further improvements in future versions of the application.

Now You: Which media viewers do you use and why?