While we will have to wait another week to find out whether that is indeed the case or not, Windows 10 Cloud hardware specs and performance targets were leaked online recently on Windows Central.

Windows 10 Cloud, according to rumors, is Microsoft's answer to Google's Chromebook. Designed specifically to compete with Google in education, rumors have it that it will be a low-cost device that will run well on hardware that regular versions of Windows 10 don't run that well on. 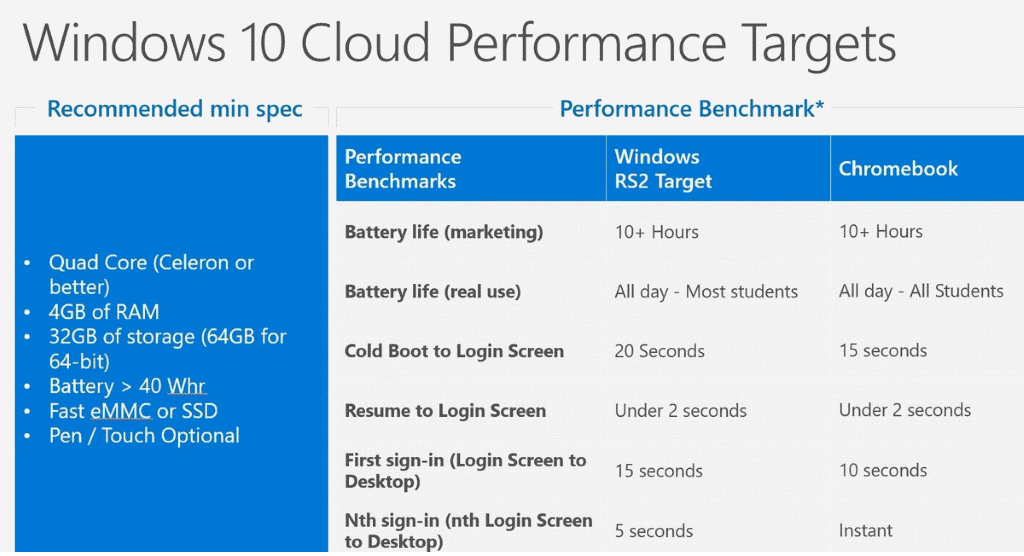 Microsoft's performance targets for Chromebook competitor highlight what the company wants manufacturers to deliver. It wants its Windows 10 Cloud devices to compete on an eye to eye level with Chromebook's battery life, and resume, and come close to the cold boot, first-sign in and consecutive sign-in times of devices powered by Google's Chrome OS.

As far as minimum hardware specs are concerned, they hold some surprises considering that Microsoft needs to compete with Google in performance and price:

How does this compare to regular versions of Windows 10?

Google does not list minimum requirements for its Chrome operating system.  If you check out the devices that are available currently, you will notice the following minimum specs:

It is interesting to note that Microsoft's Windows 10 Cloud operating system requires better hardware than Windows 10 in some areas. Most notable RAM and storage.

On the processor side, Windows 10 will run on ARM processors eventually as well which should boost battery life and reduce the cost of devices.

Windows 10 Cloud may look an awful lot like Windows RT on first glance. Microsoft launched Windows RT alongside Windows 8, but has not really mentioned the operating system since the launch of Windows RT 8.1. The company's is still pushing out patches for Windows RT, but that is about it.

One of the points of criticism in regards to Windows RT was that users could only use the apps that shipped with the operating system, Internet services and apps, and what was available in Windows Store at the time.

This is similar to how Windows 10 Cloud operates, but with two notable differences.

Microsoft wants to establish a Chromebook competitor, especially in the US, a market where Google has been conquering the Education sector with its low-cost Chrome OS powered devices.

It remains to be seen how well this is going to work out for Microsoft. While Windows 10 Cloud looks to be better in all aspects than Windows RT, price, battery life and functionality will determine whether the operating system will have a chance to break Google's domination in the niche.

Now You: Will Microsoft's Windows 10 Cloud do better than Windows RT?

Martin Brinkmann is a journalist from Germany who founded Ghacks Technology News Back in 2005. He is passionate about all things tech and knows the Internet and computers like the back of his hand. You can follow Martin on Facebook or Twitter
View all posts by Martin Brinkmann →
Previous Post: « What would you like to see in the Windows 10 September 2017 feature update?
Next Post: Nvidia GeForce Experience Node.js security vulnerability »