Microsoft is alienating part of its customer base - gHacks Tech News
ghacks.net

Microsoft is alienating part of its customer base

I know users who are perfectly happy with Windows 10. While you can criticize the operating system for its privacy issues or removed features, the general consensus seems to be that it is a step in the right direction when compared to its predecessor Windows 8.

I also know users who dislike Windows 10 and don't want any part of it. This may come from privacy issues or missing support for specific programs, features or hardware components, and those are all valid reasons for not wanting to upgrade.

Probably the main reason why users don't want to upgrade to Windows 10 is Microsoft's aggressive approach in promoting the operating system.

Most did not mind the Get Windows 10 upgrade offer that Microsoft displayed initially on devices running Windows 7 or 8.1 as it was thought to be a one time thing at that time.

Problems began when the offer was repeated and changed multiple times throughout the short span of the operating system's availability.

Microsoft does not honor user choice 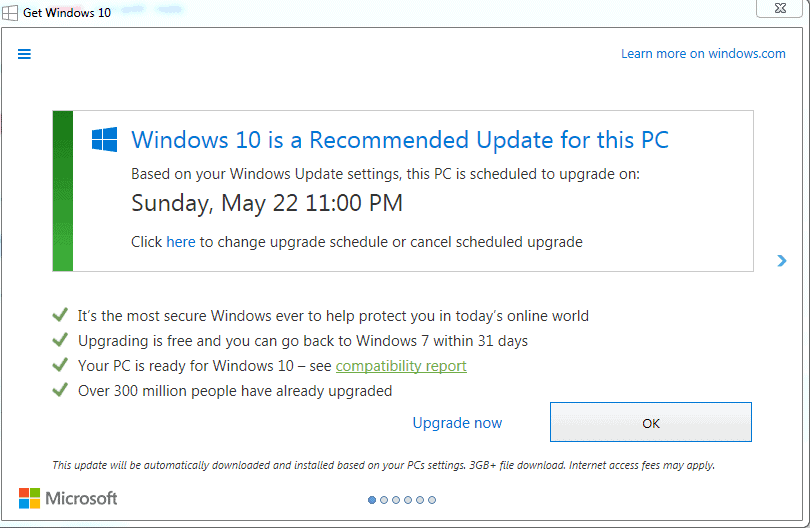 Microsoft does not honor user choice. Users who say no to Windows 10 -- and not scheduling the upgrade or accepting its download or installation should count as a clear no -- should not be bombarded with additional and modified upgrade prompts.

Apart from throwing multiple prompts at users who clearly did not want their device to be upgraded to Windows 10 the first time Microsoft asked, it is the "how" that is infuriating users.

Windows 10 upgrade prompts are changed all the time which confuses users as they have to find the one -- often hidden or obfuscated -- option to say no to the upgrade.

Hitting the close button of the upgrade prompt window worked previously, but it won't work in the latest version of the prompt for instance. If you don't pay close attention to these prompts, the likelihood is there that you will end up with Windows 10 installed.

Those are borderline malware tactics to get users to upgrade.

Even experienced users are at a loss, as hiding the updates that are responsible for displaying the Get Windows 10 offer is nothing but a temporary solution.

In fact, besides security updates, the updates that Microsoft appears to publish the most for Windows 7 and Windows 8.1 are updates that prepare the operating systems for the upgrade to Windows 10, or push a new version of the Get Windows 10 prompt on those systems.

Some users helped themselves by disabling all updates as Brad Chacos notes over at PCWorld. That option is dangerous if security patches are not downloaded and installed manually when they are released.

While user systems may be safe from being upgraded to Windows 10, since updates that push the new operating system are not downloaded and installed anymore, users will have to spend time downloading and installing security updates manually.

Note: The best option to block Windows 10 on a device running a previous version of Windows is to either use software like Never10 or GWX Control Panel, or configure the system manually for blocking Windows 10.

The main issue for many Microsoft customers who use Windows is that the company does not accept no when it comes to Windows 10, and that its tactics to get users to upgrade to the new operating system are anything but customer friendly.

Another interesting question is how alienated customers will react when they have to pick another operating system, for instance when buying a new PC or the current operating system expires.

Now You: Is Microsoft doing itself a favor here?

Martin Brinkmann is a journalist from Germany who founded Ghacks Technology News Back in 2005. He is passionate about all things tech and knows the Internet and computers like the back of his hand. You can follow Martin on Facebook or Twitter
View all posts by Martin Brinkmann →
Previous Post: « Microsoft ends the 260 long path limit (sort of)
Next Post: How to disable Windows 10 Live Tiles permanently »