Dropbox announced today on the official Help Center website that it plans to end support for Microsoft's Windows XP operating system in the coming months.

Extended support for the Windows XP ended more than two years ago on April 8, 2014 which means that feature, fix or security updates are no longer released for devices running the system (There is a way to still get updates for XP, but it requires Registry changes).

Some companies -- Google or Dropbox for instance -- made the decision back then to continue supporting the XP operating system thanks to its large user base.

While XP is still listed with a sizable share of the market, around 10% currently as of April 2016, companies that supported XP previously have started to drop support. Google Chrome dropped support for XP recently for instance. 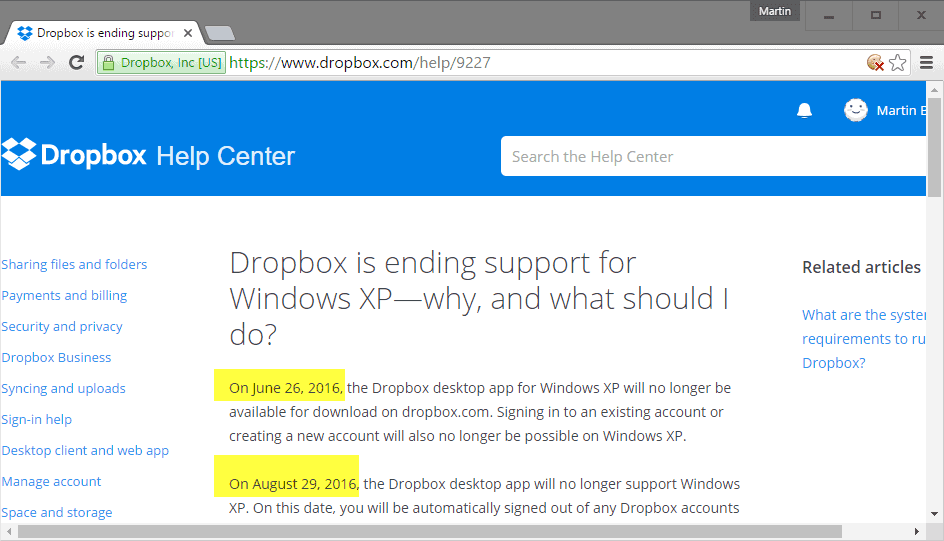 Dropbox announced that it will drop support for Windows XP in two phases:

The wording of the support article is somewhat confusing as some passages don't mention the desktop client explicitly when it comes to force sign outs or inability to sign in.

Dropbox ends support for its desktop client on systems running Windows XP. This means that XP users won't be able to download the client or sign in to the client anew starting June 26, and that already signed in users will be logged out of the Dropbox desktop program automatically starting August 29, 2016.

XP users can still access all their files directly on the Dropbox website. While that may not be as comfortable as using an offline client, it at least gives them options to access files on XP systems.

There is also the change that third-party sync clients, , will continue to work on Windows XP machines. This is probably the best option for XP users if that is indeed the case as it ensures file sync support on XP systems even after Dropbox discontinues official support for the operating system.

Martin Brinkmann is a journalist from Germany who founded Ghacks Technology News Back in 2005. He is passionate about all things tech and knows the Internet and computers like the back of his hand. You can follow Martin on Facebook or Twitter
View all posts by Martin Brinkmann →
Previous Post: « How to change Cortana's language directly
Next Post: Speed up the Windows right-click menu »