Win10 Security Plus is a free tweak program for Microsoft's Windows operating system that has a strong focus on security modifications.

What may be confusing right from the get go is that it is compatible not only with Windows 10, but also previous versions of Windows all the way back down to Windows XP.

Win10 Security Plus is a provided as a portable version that you can run from any location you desire after extracting the downloaded archive. 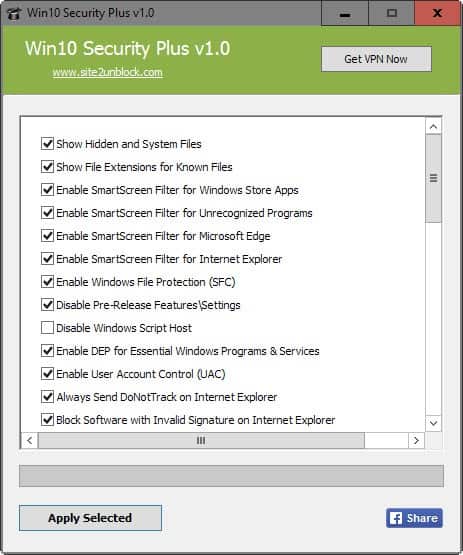 The program displays all tweaks in a long list that you need to scroll to go through all of them. Each tweak is listed with its name and a checkbox, with the latter being used to change the state of the setting.

While some tweaks are explained by the title, others are not, and that is one of the shortcomings of the program.

For instance, what impact do changes to "restrict changes to Base System Objects", "enable DEP for essential Windows programs & services" or "defer Windows upgrades" have?

Most items are self-explanatory though, and features range from basic tweaks that you can do easily in Windows as well (show hidden files and folders), to modifying core Windows features such as Windows Update, Remote Registry or Windows Defender.

What may be a bit confusing is that a checkmark may indicate that a feature is enabled or disabled, and that this becomes clear only when you read the title.

For instance, there are checkmarks in "disable Remote Registry service" and "enable Windows Defender".

A checkmark indicates if "what the title mentions" is true or false, and not whether it is enabled or disabled.

What's good though is that the program checks the corresponding system settings and features, and either displays a checkmark or not according to those settings.

Last but not least, you will notice that you cannot resize the program window to display more tweaks at the same time which means that you will only see part of the tweaks in the interface at all time.

The majority of tweaks provided by Win10 Security Plus are valid for all versions of Windows.

Once you check or uncheck boxes in the application window and hit apply, you are prompted to create a system restore point. That's useful as it enables you to restore all settings should things turn out wrong.

The program prompts you again after making the modifications to reboot the PC to apply the changes.

What's missing here is an option to restore settings directly from the program interface. That's not a problem if you can remember the default states of each tweak, but problematic if you don't.

Win10 Security Plus is a portable program for Windows that you can run whenever you need to modify the 40 or so settings or features of the operating system.

The software has some usability issues that I mentioned in the review but nothing that one could consider a deal breaker.

Martin Brinkmann is a journalist from Germany who founded Ghacks Technology News Back in 2005. He is passionate about all things tech and knows the Internet and computers like the back of his hand. You can follow Martin on Facebook or Twitter
View all posts by Martin Brinkmann →
Previous Post: « Arq 5 Backup Software released
Next Post: Ron's Renamer: powerful rename utility »