These figures are not exact and there is always some fluctuation, but they may reveal trends. Over the past five months, Windows 10 managed to gain usage share while all other Microsoft operating systems, Windows XP, Windows 8.1 and Windows 7, dropped by a few percent in the same period.

While Windows 10's growth appears to slow down somewhat -- which is understandable considering that users accepting Microsoft's free upgrade offer to the operating system have done so largely by now -- it is still on its way to overtake all Windows versions except for Windows 7 in the coming months.

Assuming a growth of 1%, it will take approximately two additional months before Windows 10 overtakes Windows XP and Windows 8.1 in usage share.

Microsoft plans to fuel the growth in early 2016 by adding Windows 10 as an important update to Windows Update on devices running Windows 7 or Windows 8.1. It is unclear right now however how much of an impact the move will have on the operating system's growth in the following months.

Net Market Share is not the only company collecting operating system statistics. Steam's November 2015 hardware survey results list Windows 10 already as the second most used operating system on the platform trailing only Windows 7 on it.

The recorded 29.85% puts it in a firm second place trailing Windows by less than 11%. If growth continues in the same fashion in the coming months, it will overtake Windows 7 in less than six months as the number one operating system on Steam.

PC gamers are known for adopting new operating systems and hardware faster than the general public, and the Steam stats are clearly highlighting that as Windows 10's usage share is much higher than on all other services collecting these statistics.

Now You: Where will Windows 10 stand a year after release? 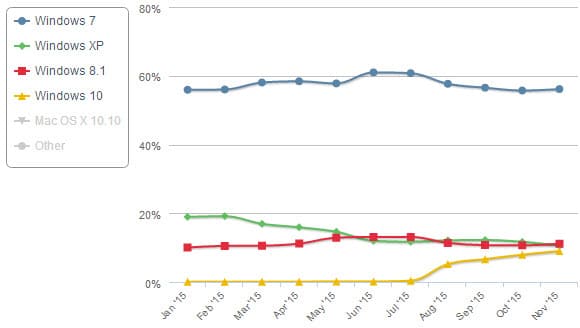