It is quite difficult to block the free upgrade offer to Windows 10 on operating system's running Windows 7 or Windows 8.1.

While it should be as easy as clicking on a "no-button", Microsoft's aggressive upgrade strategy is everything but customer friendly.

Even if you forget about upgrade enforcement on some systems, which according to Microsoft was due to a bug and not on purpose, it seems almost impossible to block the offer for good on some systems running previous versions of the operating system.

Even if you run programs like GWX Control Panel or I don't want Windows 10, you may be in for a surprise as the update keeps coming back on some systems.

According to the author of GWX Control Panel Josh Mayfield (via Computerworld), users of his software notified him that the upgrade state of the system running Windows 7 or Windows 8 was reset from their choice not to upgrade to Windows 10, to the default option which presented the update to them again. 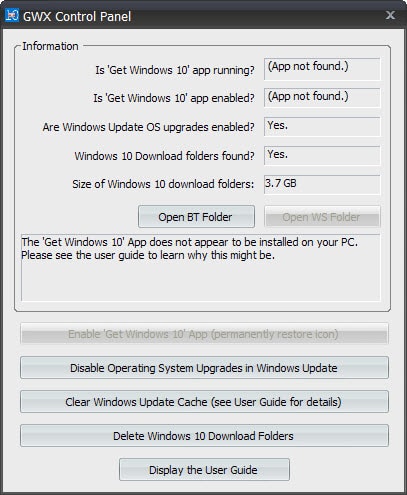 Mayfield, who added a monitoring component to his program recently to detect changes to settings related to the upgrade, mentioned two changes in particular that are responsible for the behavior.

As far as the updates to the Windows Update Client are concerned, the following is mentioned in the update description on both Support page entries.

This update enables support for additional upgrade scenarios from Windows 7 to Windows 10, and provides a smoother experience when you have to retry an operating system upgrade because of certain failure conditions. This update also improves the ability of Microsoft to monitor the quality of the upgrade experience.

The update information are identical with the exception that Windows 7 is replaced by Windows 8.1

According to Mayfield, these updates "tell" the Windows PC that the computer can be upgraded to Windows 10. He added that the Windows Update client appears to check the settings several times an hour which coincides with the unwanted behavior that settings are reset on those systems.

Microsoft announced earlier this year that it would push out Windows 10 more aggressively on systems running older versions of Windows. The company plans to make the upgrade a recommended update in Windows Update which would install it on all systems where recommended updates get installed automatically or where users install those manually.

Microsoft wants to boost adoption of Windows 10 as it is betting big on the success of the operating system, and it seems that the company continues to do so in an aggressive manner that gives users little choice but to pay special attention to any new update or modified updates the company pushes out via its Windows Update service.

Now You: What do you do to stop the upgrade to Windows 10 dead in its tracks? Or have you updated already to the operating system?