Firefox Electrolysis, a new multi-process architecture of the browser also known as e10s, won't see a release in stable Firefox this year.

Mozilla announced back in early 2013 that it was considering reviving the multi-process architecture project for Firefox, and began work in earnest in late 2013.

It made the project a priority in mid-2014, and things looked for a while as if a release was just around the corner.

Electrolysis was enabled in Firefox Nightly shortly thereafter, and found its way into the Developer Edition of Firefox later as well.

If you check the Electrolysis page on Mozilla Wiki you will notice that multi-process Firefox won't come out this year anymore in the stable version.

In fact, Electrolysis has been postponed to Firefox 45 at the very least. Considering that things have not gone as smoothly as projected, there is a chance that things will be delayed even further than that.

Firefox 45 will be out on March 7, 2016 if nothing major gets in the way. It is unclear as well when the feature will land in Firefox Beta.

So why the delay? 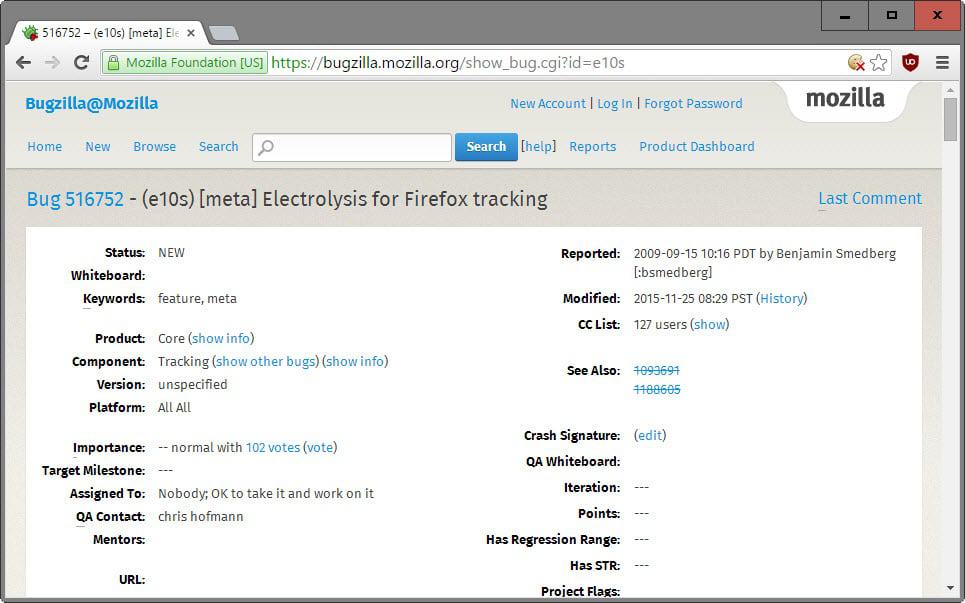 If you check out the main tracking bug for e10s on Bugzilla, you will notice the huge number of depending bugs. While many of those have been resolved already, as indicated by them being struck out, more than 100 bugs are still being worked on by various members of the team.

Not all of the bugs listed on the page have the same priority, and e10s might very well ship with some of them still being in the works.

If you check the core e10s tracking bug, you still find more than 20 bugs open at the time of writing.

A visit to Are We e10s Yet, the site tracking add-on compatibility in regards to multi-process Firefox, highlights that a large portion of Firefox add-ons are not yet compatible with Electrolysis. Among the incompatible add-ons popular extensions such as NoScript, Adblock Plus, Web of Trust, Ghostery, LastPass or Session Manager.

If Mozilla would launch multi-process Firefox today, those incompatible add-ons would either fail to work at all, partially, or would cause other issues in the browser.

Firefox users can help Mozilla test Electrolysis by running Nightly or Developer versions of the web browser. The more feedback Mozilla gets in regards to what is working and what is not the better.

I don't really mind waiting a bit longer for the feature as I prefer it to be compatible with all or at least the majority of Firefox add-ons and features before it is launched. Doing otherwise would certainly be disastrous for the browser.

Now You: Are you waiting for multi-process Firefox? How would you like to see it turn out?

Martin Brinkmann is a journalist from Germany who founded Ghacks Technology News Back in 2005. He is passionate about all things tech and knows the Internet and computers like the back of his hand. You can follow Martin on Facebook or Twitter
View all posts by Martin Brinkmann →
Previous Post: « Mozilla will do well financially without Google
Next Post: Pref Helper reveals preference names of Firefox options »