Mozilla started to work on a multi-process architecture for Firefox back in 2009 but put it on a backburner later on to implement other changes that promised to yield a higher return in terms of resource usage and benefits.

Electrolysis (E10), that is the codename for the project, has gained some traction recently after it was brought back from the dead 13 months ago.

The project will also pave the way for sandboxing in the browser, even though it is not a part of the project itself. This means that Firefox may not support sandboxing when Electrolysis lands in the stable version, but that it is likely that it will eventually because of it.

A development version has been part of Firefox's cutting edge channel Nightly for several months now. You had to flip a configuration switch previously to enable the functionality in the browser. This changed with the release of Firefox 30 when Mozilla integrated the option to launch a new Electrolysis window in the browser's File menu.

Since the menu is not displayed by default anymore, you may need to tap on Alt to display the menu bar in the browser. 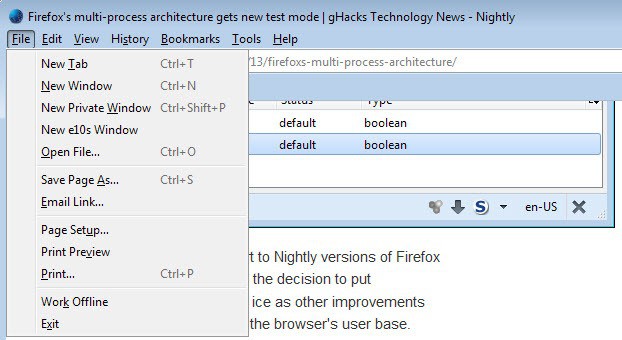 A new post by program manager Chris Peterson confirms that Mozilla seems to have made e10s a development priority as new members have been added to the team recently.

According to the post, several Firefox Metro engineers, a new engineering manager, a Google Summer of Code student, and a gfx contractor have been added to the project team recently.

Since development stopped on the Metro version of Firefox for Windows 8 some time ago, resources became available that the project now benefits from.

A member increase underlines the importance of the project for Mozilla. The team has not released information yet on a projected stable release date, and it is unlikely that this is going to happen anytime soon. What is clear though that development will accelerate thanks to the addition.

Previous Post: « Pale Moon author confirms that browser will not ship with EME, ads or Australis
Next Post: This is Firefox's upcoming page translation feature »