Windows 10 feels in some regards like an incomplete system as there are things that don't work properly yet or are yet delivered the way Microsoft wants them to be made available.

This includes prominent features such as the Settings/Control Panel "where is that damn setting issue", Windows apps that sometimes crash without you knowing why, or the Windows Start Menu which, while better than the Start Screen abomination (on desktop systems), lacks customization options.

Turns out the Start Menu is affected by a bug currently that may have disastrous consequences on system stability and performance.

You may experience the issue if the count of all Start Menu items exceeds 512. This may sounds like a lot but if you take into account that items are any file, folder or shortcut listed in the Start Menu, is quickly turns into a wider issuer that users can experience. 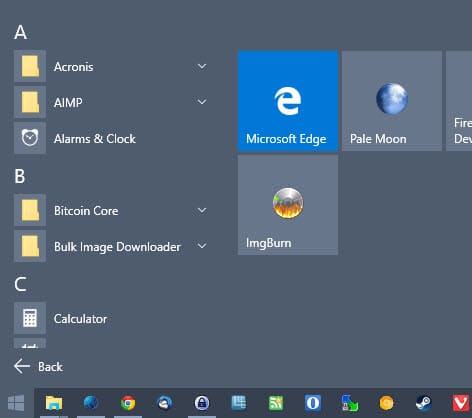 The count goes up quickly and if you don't monitor it -- which is complicated as you don't get a count of items anywhere -- you will experience issues.

According to Brad Sams over at Petri.com, users who work on systems where the limit is exceeded may notice that apps and programs are not listed anymore in the Start Menu, or crashes when opened.

He notes that it is easy enough to test this on systems running Windows 10. All it takes is to add 500 or so items (shortcuts) to %appdata%\Microsoft\Windows\Start Menu on the system to experience the issue.

A click on Start Menu after performing the operation, or clicking on Start Menu on systems that exceeded the limit naturally, it may take up to fifteen seconds to open, may crash when you use it, and may have missing apps in it on top of that. It may also happen that the Start Menu does not react at all when you click on the button or tap on the Windows-key on your keyboard.

If you are experiencing the issue, open the Start Menu folder in File Explorer and remove some of the entries manually from there. Maybe you find program folders there that are no longer installed, or, and that is a valid option as well, delete shortcuts to readme files and websites that you don't need in program folders.

Please note that the Start Menu folder does not list installed apps.

Martin Brinkmann is a journalist from Germany who founded Ghacks Technology News Back in 2005. He is passionate about all things tech and knows the Internet and computers like the back of his hand. You can follow Martin on Facebook or Twitter
View all posts by Martin Brinkmann →
Previous Post: « Why you cannot launch multiple instances of Windows apps the usual way
Next Post: Sudo and Kill commands for Windows »