We have covered BitTorrent Sync several times before here on Ghacks as we have followed the file synchronization solution closely ever since the first alpha version was released back in 2013.

The main appeal of the product is its direct device to device synchronization capabilities. This is great for privacy as data is not parked or stored permanently in the cloud. While it means that both devices need to be online, it ensures that data is not stored on a server farm that you have no control over.

Functionality and pricing was introduced with the release of BitTorrent Sync 2.0 back in March 2015. The announcement caused quite the controversy as it limited the root folder count that you could sync with the software to ten. Since the limitation was not available previously, it looked as if the company wanted to get users to sign up for Pro accounts which were available for $39.99 per year at that time.

Update: BitTorrent Sync has been spun-off by BitTorrent Inc. The solution is called Resilio Sync now. A free plan is still available for Home users. End

BitTorrent Inc announced on Friday that it made the decision to change pricing and functionality for personal users. 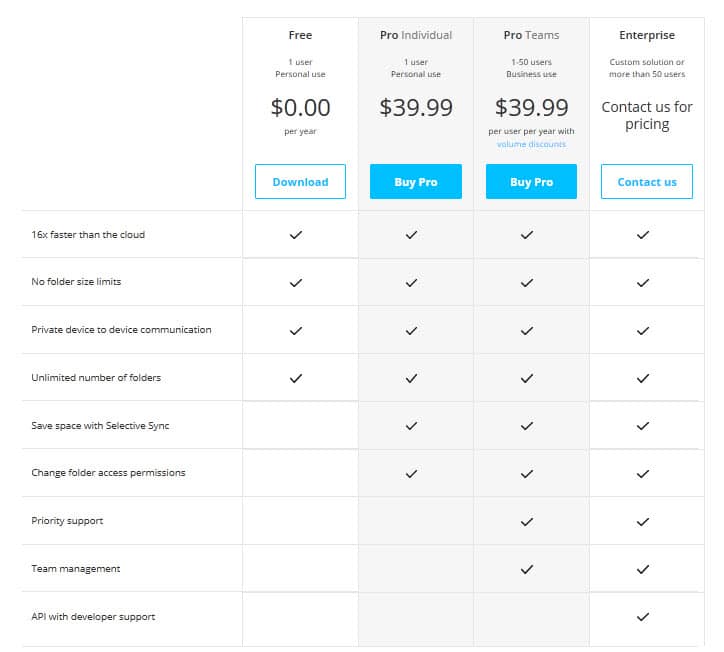 Good news is that the free version remains, and that the ten folder limit has been lifted. This means that free users can once again add as many root folders to the application as they like without having to worry about reaching the artificial limit.

The new pricing table on the official website reveals another change: the company added a Pro version for individuals to the list of available plans.

Individuals who sign up for it pay a one-time fee of $39.99 instead of the yearly subscription fee that businesses pay that want to use the Pro functionality.

The two core differences between free and pro individual plans are that pro users get access to the selective sync feature (formerly known as sync all) which they can use to sync some but not all contents of a folder, and that they can change folder access permissions.

What individual pro users don't get are team management functionality and priority support, both of which are only available for business users who sign up for the pro subscription plan. This was not the case previously as all Pro customers received priority support.

The FAQ answers questions existing pro users may have. Individual Pro users may switch to the non-subscription license. Emails with instructions and information will be made available to all pro customers according to BitTorrent Inc.

It appears that individual Pro licenses won't provide lifetime upgrades, at least that's how I interpret the following Q and A.

Q: If I purchase a non-subscription license of Sync for personal use, will I be charged for major product updates in the future?

A: Non-subscription licenses will be subject to the standard product warranty but no Priority subscription support

Now You: Are you a BitTorrent Sync user? What's your take on the changes?

Martin Brinkmann is a journalist from Germany who founded Ghacks Technology News Back in 2005. He is passionate about all things tech and knows the Internet and computers like the back of his hand. You can follow Martin on Facebook or Twitter
View all posts by Martin Brinkmann →
Previous Post: « If you compare Apples and Oranges, at least be thorough
Next Post: Ghostery sneaks in new promotional messaging system »