The popular free image editor Paint.net has been released as 4.0 final. Development of the new version started last year with beta versions released regularly to the interested public.

Paint.net 4.0 introduces several major changes to the program which will affect some of its users. As far as system requirements are concerned, it is supporting Windows 7 SP1 or newer only and requires the Microsoft .NET Framework 4.5 to run on the target computer. The framework will be installed automatically during installation if not present.

If you are running an alpha or release candidate version of Paint.net currently then you may need to download and install the new version manually as the update is not picked up at the time of writing.

Paint.net 4.0 ships with a new rendering engine that supports multi-core processors and GPU hardware acceleration among other things. As far as performance is concerned, you may notice huge improvements in this area. Startup performance is improved thanks to the Multicore JIT feature of the .NET Framework 4.5.

You may also notice a drop in memory usage, faster rendering thanks to the new asynchronous multi-threaded rendering engine and responsiveness improvements especially when working with large images. 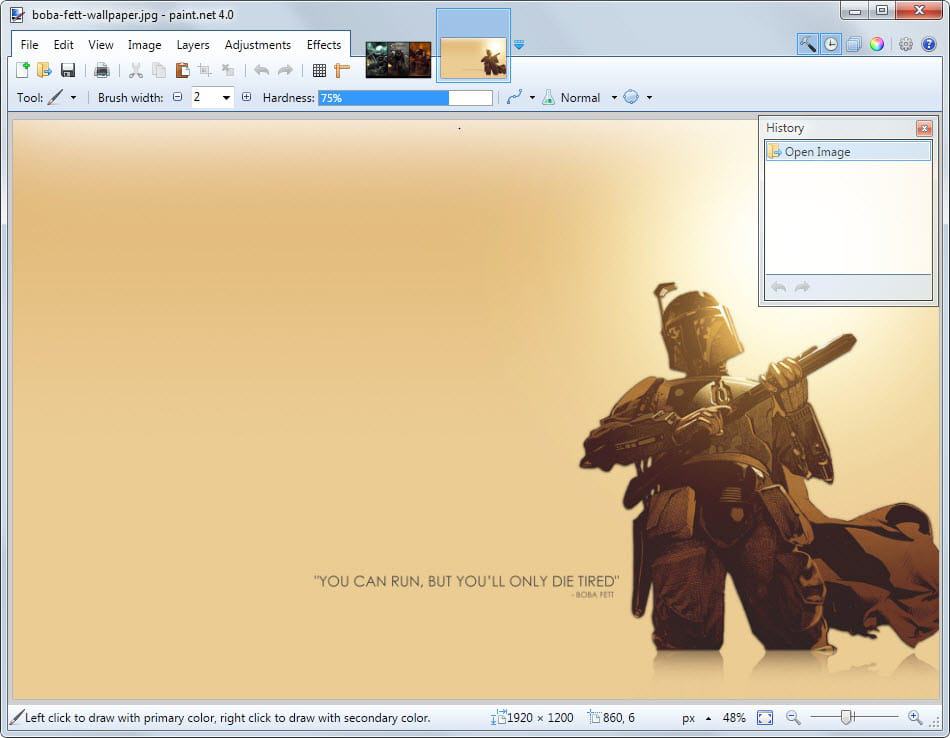 Improvements have been made to selections. You will notice better performance and reduced processor usage if hardware acceleration is enabled and better quality thanks to anti-aliasing support.

Both of these features can be disabled at any time in the program. To disable hardware accelerated rendering click on the settings icon at the top right corner of the window and remove the checkmark from the box under user interface. It is only advised to do so if you notice issues while using it, for instance screen artifacts. Anti-aliasing can be changed to the previously used pixel selection quality in the toolbar after the selection tool has been selected from the tools menu.

The settings dialog has been redesigned which should make it easier to configure defaults. Just select Tools while the settings window is open to change default values. Here you can for instance change the default text size and style, default gradient or the hardness of the brush that is selected by default. 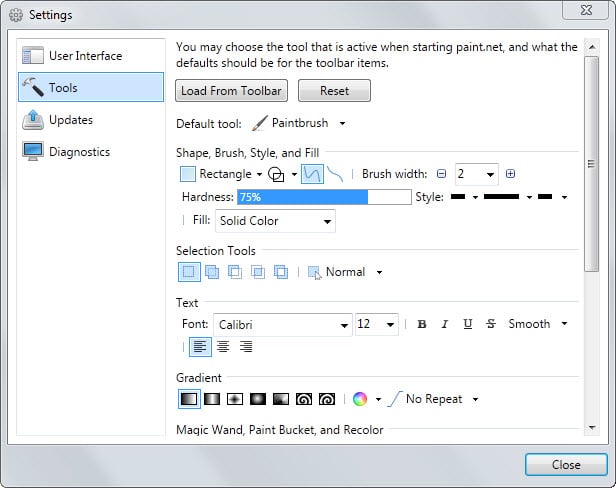 Several operations have been improved. The resize quality has been improved for instance, as has been the layer user interface and the Red Eye Removal effect.

Improvements have also been made to the application's usability. All open images are now displayed as thumbnails when you hover over the Paint.net icon in the Windows taskbar. The program recognizes EXIF metadata now and will rotate images accordingly when opened.

Paint.net is now also listed under default programs in Windows so that it is easier to configure the program's file associations in the operating system.

Last but not least, many of the tools the editor makes available have seen improvements as well. The drawing tools benefit from smoother mouse movement for instance, the gradient tool has improved rendering quality and the new shapes tool replaces the previously supported shape tools consolidating them into a single tool supported 27 different shapes.

Paint.net is a great image editor. While it is unfortunate that support for pre-Windows 7 systems has been dropped, the massive improvements to the program's performance and features make it almost a mandatory update for all users.