How to restore scroll bar arrows in Google Chrome

Sometimes it is small changes that have a huge impact. Google rolled out an update to the stable version of Chrome recently which brought it to version 32. Along with the excellent audio indicators came another change that seems to have impacted -- some -- Windows users especially.

Google removed the scroll bar arrows from the bar. This may not seem like a big deal to you, especially if you are using a drag motion to scroll, the keyboard, or something fancy such as mouse gestures.

But if you have used the scroll bar arrow for most of your computing life, then you may have found yourself without an option that you have used for a very long time. 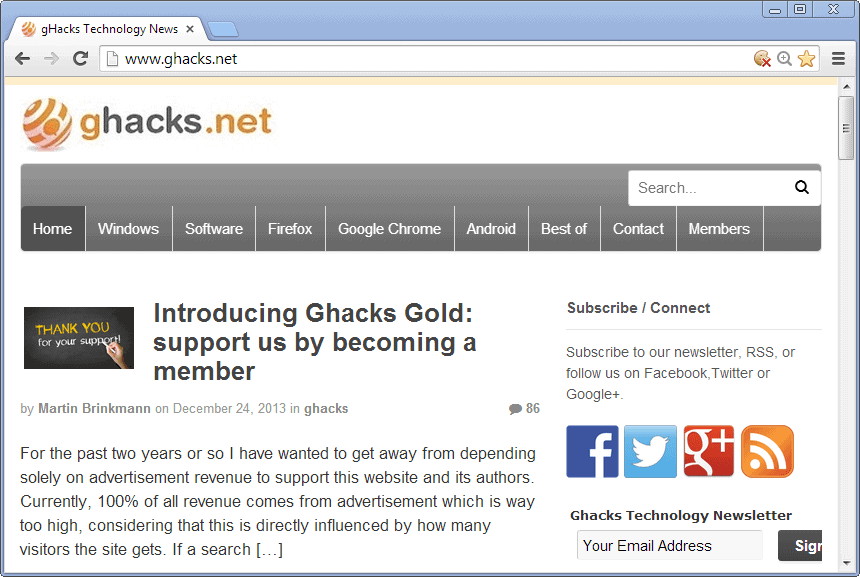 The initial bug report on Google Code is filled with user protest. Some stated that they would move back to the Firefox web browser if Google would not fix it, while others suggested to go back a version to avoid it.

Official comments by Google employees suggest that the company is monitoring user responses but won't take action at this point in time. This may or may not change depending on how this evolves, or more precisely, the number of new comments the issue gets.

If you are a Chrome user who does not agree with the change, you have only one option at the time of writing. I'm not counting downgrading Chrome or moving to another browser as options, even though they may work for you.

Probably the best option that you have is to install the Win7 Scrollbars extension. It adds scroll bars to Chrome again the way they used to be. They appear to have the right width and height, and arrows on both sides that you can use for scrolling if you prefer to do it this way.

Once installed, they look like the ones that you see on the screenshot at the top of the article. While there are other extensions that may work for you as well, this one seems to be compatible with the majority of pages, including Gmail and other Google pages that use customizations.

It won't work on chrome:// urls though, but that is a limitation by the browser itself and cannot be changed. You may also want to enable the extension to work in private browsing mode, if you use it.

The removal of scroll bar arrows seems like a small change on first glance. While the majority may not have even noticed that they are gone, for example if they use other means of scrolling, it appears to be a drastic change to users who use them exclusively.

It is interesting to note that this is not the only UI element change in Chrome 32 on Windows. Radio buttons and checkboxes too use a custom non-standard design now which makes them harder to click and interact with.

Are you affected by the changes? If so, what are you doing to resolve the issue?

Update: Scroll arrows are back in Chrome 34 for Windows.

Martin Brinkmann is a journalist from Germany who founded Ghacks Technology News Back in 2005. He is passionate about all things tech and knows the Internet and computers like the back of his hand. You can follow Martin on Facebook or Twitter
View all posts by Martin Brinkmann →
Previous Post: « Google Chrome's password autofill to receive new feature
Next Post: How to monitor extension updates in Chrome and Firefox »