How to go back to an old version of Firefox - gHacks Tech News
ghacks.net

How to go back to an old version of Firefox

My Firefox Nightly version that I have been running for some time now received an update two days ago that rendered it completely unusable. I got weird black bars on the screen that would move around on mouse movement and made it impossible to work with the browser at all. I was not too worried about that at the time as I knew that Nightly versions of the browser sometimes had hiccups like this, and that the next update would likely fix the issue again.

It did not, which left me with two options: use a different channel of Firefox in the meantime or go back to the Nightly version that worked just fine.

I decided to use Firefox Aurora in the meantime, but the second option would have worked as well. The core benefit for me was that I could simply switch to Aurora without touching the Nightly version at all. I ran it from time to time to check for updates, and the latest update today resolved the issue.

How to restore old Firefox versions

Restoring an older version of Firefox is actually not that difficult at all. There are however a couple of best practices that I'd recommend you follow before you roll back an update of the browser.

The first thing that you may want to do is back up your Firefox profile. If you can start Firefox on your system, do the following to open it: 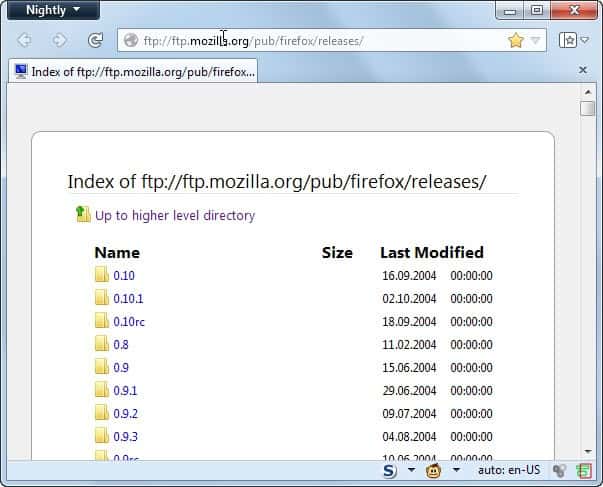 It is likely that you do not have the old Firefox installer on your system anymore. That's why it is necessary to download that version again from the Internet. I highly suggest you download it from the official source, that is Mozilla, and not some third party repository.

Probably the best location to download old Firefox versions is the Mozilla ftp server. Here are the links pointing to the various release channels: 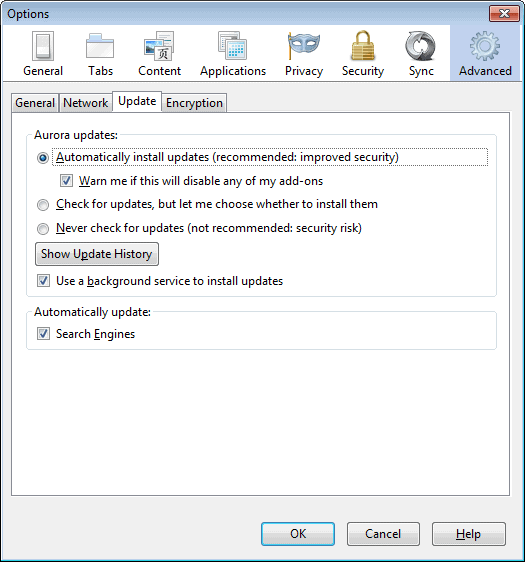 You may want to disable the automatic updating of the browser for the time being, as you may end up with the same issue after it has been updated. To block updates in Firefox, do the following:

Instead of installing updates to the browser automatically, Firefox will now display a prompt to you that puts you in control of the update process. You can select to install the update, or block it for the time being (for instance to wait for the next release to try again).

Running an older version of Firefox may put your system at risk. Mozilla patches security vulnerabilities that are found in the browser regularly, which may mean that you are running a version of the browser that is vulnerable to certain attack forms.

You may be able to mitigate some of those with proper security software. One option that you have is to use sandboxing to prevent that successful attacks reach the underlying operating system. Other options include running a mitigation software like EMET or Malwarebytes Anti-Exploit.

It is probably easier to switch the release channel if the reason for going back to an older version is a bug in the current version that you are running. This works best if you are using Nightly, Aurora or Beta versions of the browser by default, as you can go back a version at the very least in this case.

You may also want to consider switching to Extended Support Releases instead, which do not implement all the changes that regular versions of Firefox get.

Martin Brinkmann is a journalist from Germany who founded Ghacks Technology News Back in 2005. He is passionate about all things tech and knows the Internet and computers like the back of his hand. You can follow Martin on Facebook or Twitter
View all posts by Martin Brinkmann →
Previous Post: « Temporary fix for Instagram's photo viewer in Firefox
Next Post: HTTP Nowhere for Firefox blocks all but encrypted traffic »