I remember only one instance in the past year where Firefox's memory usage went beyond the 1 Gigabyte mark on my desktop computer and that was likely caused by a issue in a Nightly version that seems to have been resolved rather quickly. I usually have about 20 to 30 tabs open in the browser at any time, and sometimes open a second browser window to display two pages on the screen side by side. The usual memory usage here is about 300 Megabyte which is not really that much considering that my desktop PC has 8 gigs of RAM.

Still, memory usage may be an issue at times, especially if you are running Firefox on a system where RAM is a precious resource, or when you open that many tabs that you may even feel the limitations on newer computer systems.

Mozilla did a lot in the past year to improve Firefox's memory usage up to a point where it managed to sneak by Chrome and other browsers when it comes to that.  One feature that Mozilla did add to Firefox is the on-demand loading of tabs when the browser starts. This speeds up the start up of Firefox and reduces the initial memory usage of the browser at the same time.

The BarTab extension went a step further and introduced the automatic unloading of tabs to the browser which ensured that tabs got unloaded - but not closed or modified in any other way - after a certain amount of inactivity. BarTab is unfortunately no longer maintained.

I mentioned a similar add-on for the browser in the what do to if Firefox is slow that I published a couple of months ago. UnloadTabs provides you with a similar feature set and the main difference to BarTab is that it is actively maintained by its author.

The extensions provides you with two options to improve Firefox's memory usage. It first enables you to unload any tab, or all tabs except a selected one, in the web browser manually. To do so, simply right-click on any tab and select the appropriate action from the context menu.

The second feature automates the process for you. You can set a timeout interval after which active tabs get unloaded automatically to free up memory that they have occupied. 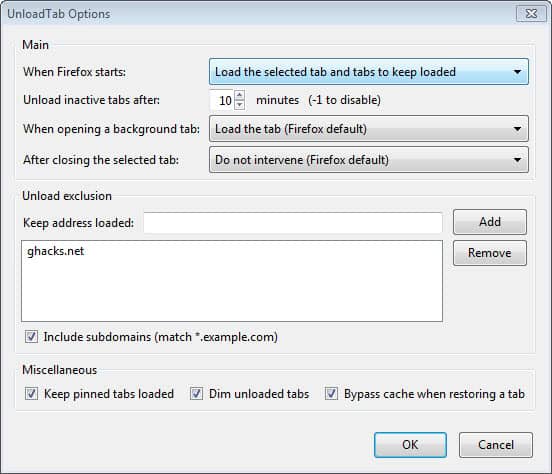 That's not all though. The settings make available several other options that may be of interest to some users:

Note that the memory usage of the browser won't go that high anymore because of open tabs thanks to the optimizations that Mozilla implemented in recent time. If you are noticing a high memory usage it is more likely that it is caused by an extension or plugin installed in the browser.