The Infinite Jukebox: Play your favorite song as long as you want

Are you currently listening to a song that you have set to repeat because it is that great? If you look at the success of Gangnam Style on YouTube, it certainly feels as if lots of people have that video on repeat.

The Infinite Jukebox lets you play your favorite song as long as you want, but not in the way that you would expect. Instead of just repeating the song from beginning to end over and over, it analyzes the song to find connections in the song. The result is a representation of the song as a circle with connectors linking parts of the song that are similar to each other. These connections are then used - randomly - by the algorithm to jump around in the song which in many occasions is a seamless experience that goes by unnoticed.

The end result is a new interpretation of your favorite song that plays on forever. 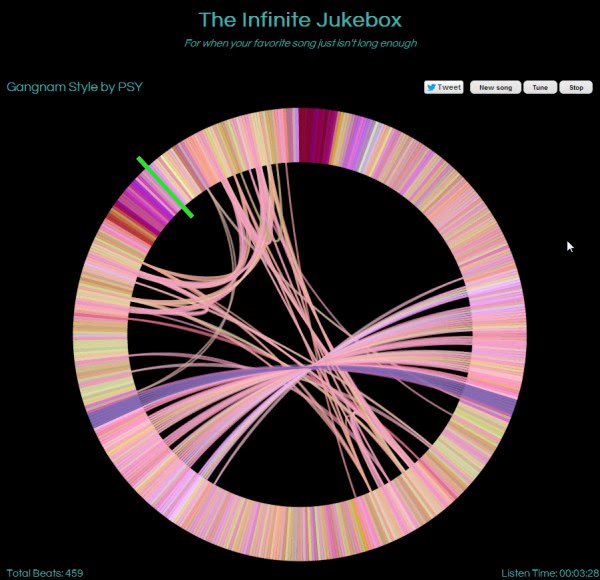 You can upload your own mp3 to The Infinite Jukebox site or play one of the songs that other users have uploaded to it previously. The loading and pathway calculation takes a couple of seconds but when that is done you are ready to play the song for as long as you want. There is no play button which means that you need to click on the circle to start playing. Songs start at the top of the circle but you can start at any position.

A green bar starts moving clock wise then indicating the current position of the song that is playing. You will notice that it sometimes uses connections to jump to other parts of the song which seems random. That's actually a great feature since it adds versatility to the song.

The author explains the process further:

Please note that the online player is currently only working in Google Chrome and Safari (which is based on the same source), and not in other web browsers such as Firefox, Opera or Internet Explorer.