News that Rapidshare was about to change its business model came to light at the end of October 2012 when existing download limits were lifted by the hosting company. The announcement in October vaguely referred to an upcoming change that would change the company's business model to make it an effective instrument against online piracy and a shield against future disagreements with content creators.

Rapidshare notes in the announcement that the pricing won't change, and that paying users of the service get unlimited traffic for their own files and downloads of their contacts. In addition, they get 30 Gigabyte of public traffic per day which other users of Rapidshare can make use of to download files hosted by a RapidPro user. Files uploaded by free Rapidshare account owners are limited to 1 Gigabyte of traffic per day, again with the exception that traffic by the user or contacts of the user does not fall under that limit. 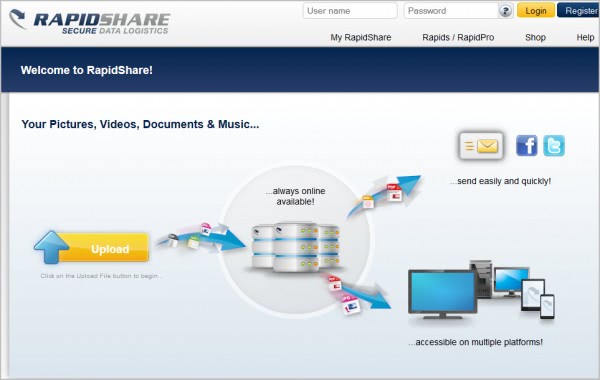 Free users benefit from the change as there won't be any download limitations at all for their Rapidshare downloads. The company notes that downloads are unrestricted for all users of the service, regardless whether they are free users, free account owners or paying RapidPro members.

In the future RapidShare will use a classic hosting model which means that not only the storage space but also the traffic created will be paid solely by the owner of the file. The prices will not change. With RapidPro you automatically have unlimited traffic for your own downloads of your files and the downloads by your contacts. Additionally you have 30 GB public traffic per day. The recipients of your files have no download limitations whatsoever regardless of if they have RapidPro, a free account or no account at all!

The core idea behind the change is to prevent massive scale copyright infringements by limiting the outgoing public bandwidth for each user of the service to 30 Gigabyte per day. While that may still sound like much, it is not really a lot if you consider that his equals less than 400 mp3 album downloads, 100 TV episodes, 40 movies or 8 DVDs releases per day.

The hosting model change will have significant effect on users who earned money from Rapidshare in the past. Users who wanted to download files previously either had to do so slowly and over a long period of time, or fast and directly by buying RapidPro points which enabled the faster downloads for them. The incentive to upgrade to a premium account is not there anymore, as downloads are no longer limited by the hosting company.