Remember Ifttt? The Internet service makes available if then actions on the Internet which you can use to automate recurring tasks. Ifttt is an acronym for If This Then That that works pretty much like if then constructs in programming languages. Some examples of what you can do with the service include sending photos that you have been tagged in on Facebook automatically to your Dropbox account, setting up a special status message for Christmas time on Facebook that gets published on the site very year, automatically send starred Gmail messages to Evernote or receive an SMS if a stock rises above a set price.

Users share recipes on the site which you can use select directly so that you do not have to configure your own. You can however create your own recipes without knowledge of programming languages whatsoever.

The Ifttt team has just added Microsoft's cloud hosting and synchronization service SkyDrive as a channel to the site so that you can integrate SkyDrive into recipes. A handful of user generated recipes are already available: 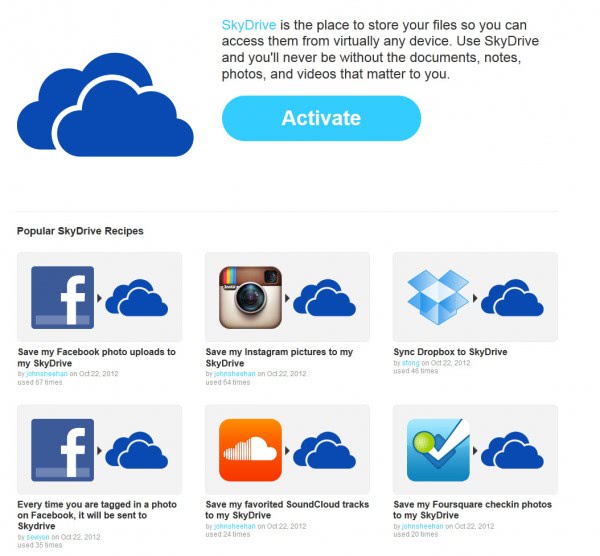 To use SkyDrive on Ifttt you need to create an account with the service first. Once done, you need to authorize Ifttt to interact with your SkyDrive account and, if you want it to interact with a second online service, with that service as well. It is not always necessary to do that, as you can also select services that are always available like email for instance.

Ifttt works well despite it still being in beta. If you are looking to automate certain activities on the Internet I suggest you give it a try. The list of recipes is a good starting point to see what the service has to offer. (via Caschy)