Reports have appeared on a number of websites that YouTube seems to display prompts to users of the site at the moment that is asking them to start using their full name on the site. When you try to leave a comment on YouTube you may see a popup or overlay window instead entitled "Start using your full name on YouTube".

The process is divided into three steps, with the first step highlighting how you will appear on YouTube if you accept YouTube's proposition to switch to your real name when commenting on the site. The popup also informs you that your channel urls won't change, and that you can still use your YouTube username to sign in just like before.

It displays how you appear right now on YouTube when you comment, and how you will appear after you have made the switch. At this point in time, you still have an option to skip the change by selecting I don't want to use my full name. 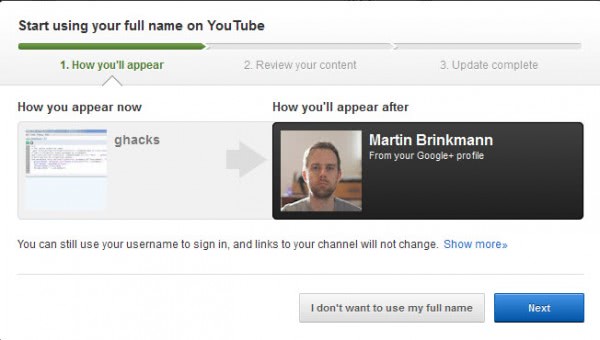 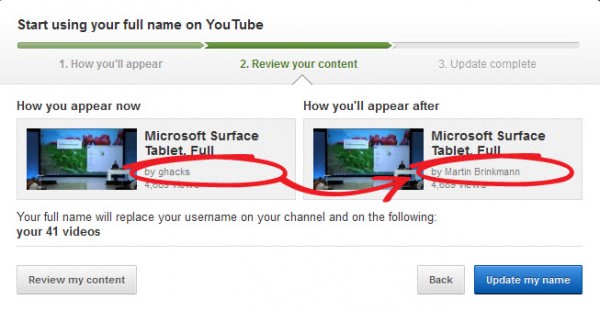 In the third and final step you get to review the changes one last time before they are finalized. You can still go back here if you want and skip the change at this point. It needs to be noted that all of your previous likes, subscriptions and favorites will be made private if you update your name on YouTube.

You may ask yourself why this is happening right now, and the most likely answer is that it is one of the ways that Google tries to fight comment spam on YouTube. It is likely that lots of the comment spam comes from the fact that users can't be identified if they use a nickname and not their real name, at least not easily.

Another reason may be to link YouTube more efficiently to Google's social networking service Google+ where the majority of users are using their real name.

Google's support page gives the following reasons for switching to your real name on the site:

If you read those reasons, you will notice that they only reflect the user perspective. Have you seen the real name popup yet on YouTube? If so, what is your take on the matter?