The past months have been filled with acquisitions and rumors about them, from Facebook buying Instagram for $1 Billion Dollars and the rumor that the company is interested in Opera Software, to the just disclosed acquisition of Meebo by Google. Meebo?

Meebo more recently launched a Meebo Bar that webmasters could display on their sites to increase engagement and revenue.

The announcement has been posted on the official Meebo blog, where no information besides the fact that Google is acquiring Meebo are revealed. Techcrunch has some background information about the deal,suggesting that it is in the $100 Million Dollar range, which is $30 Million more than the funding that Meebo received in four venture rounds in the past. 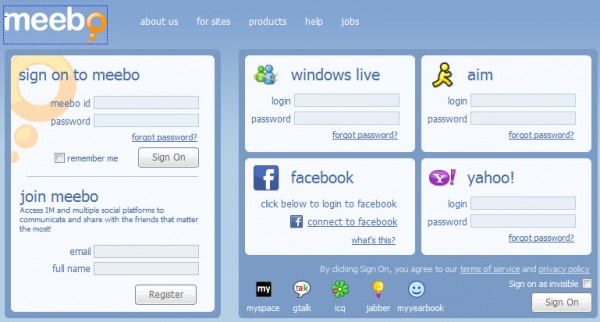 According to Techcrunch, the core product team will aid the Google+ team in building out publisher tools for Google's social networking service. It is not really clear how these products will look like, but a likely scenario is the integration of core Google and third party protocols into Google+ to improve the social network site's appeal to users. It is however likely that the services that Meebo is currently offering will either be shut down completely, or integrated partially or fully into Google+. Techcrunch reports further that layoffs are happening within the sales and marketing teams of the company.

The move once again highlights Google's dedication to move forward with Google+ to create a counterweight to heavyweight services such as Facebook.

Meebo users looking for alternatives can take a look at Imo.im, a web and application based service that is supporting several popular messaging protocols and services, or desktop applications like Miranda or Digsby.

Have you been using Meebo in the past, or the more recent Meebo Bar? If so, what is your take on the acquisition?

Update: When you visit Meebo right now you see a notification at the top of the page stating that Meebo will be shutting down for good on July 11, 2012. Only the Meebo Bar will be available after this point, while the following Meebo products will be discontinued on that day: