Google a few days ago launched a re-design of Google+ that turned the site upside down. It introduced two static sidebars on the left and right side of the screen, and a fixed width content area in-between.Â  The left sidebar linked to areas on the site that were previously shown in the header, and the right sidebar to the hangout feature and the chat.

The biggest issue however was the fixed content width, which resulted in a large whitespace area on the page on big screens. If you viewed Google+ in fullscreen on large computer monitors, you'd see a large whitespace area on the site. It is not clear why Google designed the site to be this way. Some say it is in preparation for new features that will take up that space, but that could mean that small screen users would miss out on those features.

The Internet community developed dozens of solutions (see To Much Whitespace On Google+? Reduce It! for some) that resolved the issue temporarily. Most either center the contents on the screen, or dynamically adjust the width of the content section based on the size of the browser window. 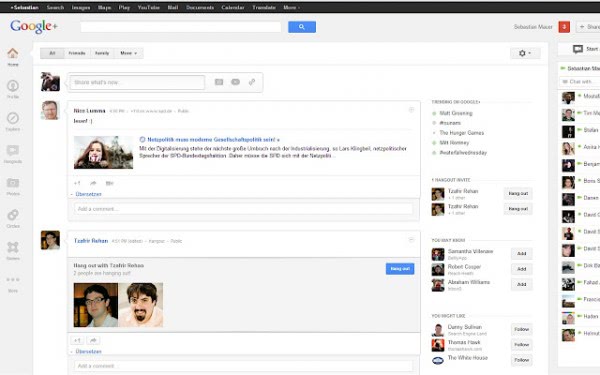 The developer notes that his solution is only temporary, and that it will become obsolete once the Google+ team starts to fill the whitespace with contents. The extension itself is not perfect, as it breaks search on the site which is something that needs to be considered. If you do not use search, you may want to give it a try though.

What's your take on the design change?