Pirateers is an online Flash game that gives you command of a pirate ship and its crew. It is an action game with light strategy elements added to it. You basically play through several days in the game, with each day starting in the pirate base where you can equip your ship and sell loot. Once that is out of the way you can set sail to fight the navy or rival pirates, or board merchant vessels. Depending on your progress in the game you can either select a generic quest from the top of the action screen, roam around freely or complete a specific quest that the game has triggered for you. Add to that a treasure hunt mini game and you end up with a solid game that is fun to play, at least for a while.

When you first start the game you get the option to select an average pirate ship, or one that is faster but weaker armor-wise. 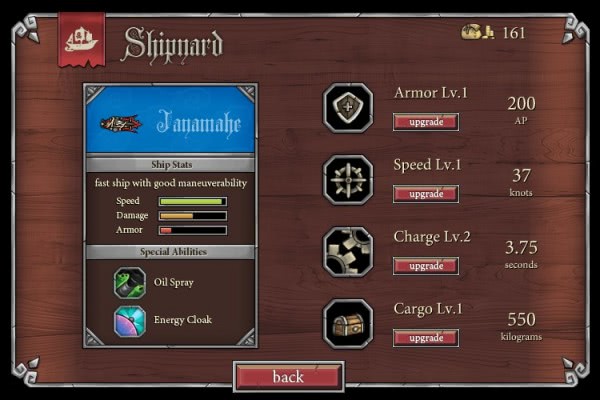 You can visit the shipyard, the weaponshop or the marketplace when you are in the base. The shipyard offers improvements for the ship itself, from better armor to faster speed or cannon loading times.

Weapons and specials can be purchased in the weaponshop. From more cannon firing power to fantasy-based updates like fireballs, or an energy cloak.

The marketplace finally is only there to sell loot that you managed to get hold previously on raids.

The action part plays a lot like the ship fights in the classic Pirates game by Sid Meier that was first released on the Commodore C-64. You steer your ship with the WASD keys, with AD changing the ship's direction and WS accelerating or slowing down the vessel. A tap on space or a left mouse click shoots the ships cannons. The special attacks can be selected with the 1-4 keys or the mouse. As I said earlier, you can select one of the available quests at the top, or pursue one of the events instead. Sometimes you find a treasure map that you can then follow to play a treasure finding minigame on an island. You have three tries to find the treasure on the island, and each failed try gives you information on how far the treasure is away from the selected location.

The day progresses automatically once you set sails, and you are returned to harbor automatically when it ends, or your armor reaches zero.

Even though you encounter some versatility game-wise, you will eventually come to a point where the game becomes repetitive. Up to that point though it is a nice fun game.