Infectionator 2 is the sequel to the highly popular game of the same name. You take on the role of a zombie mastermind in a quest to turn the world into zombie heaven. The game lets you plan your next moves on a world map where you select cities that you want to attack next. Before you do, you can visit the lab to improve your zombies, buy support items or special purpose zombies that make life a lot easier.

When you select a city the game switches to city view where you see all human inhabitants walk around. In the beginning you will only encounter harmless humans who can't defend themselves - other than run away. In later levels, you will encounter policemen, soldiers, agents and all sorts of armed personal that fight back and make your missions a lot harder.

You start with one option to spread the virus, and get additional options, special purpose zombies and support items, later on once you earn enough money to buy those in the lab. When you spread the virus, you need to find a location with many pedestrians, and need to remember that some humans - like agents - are immune to the virus. 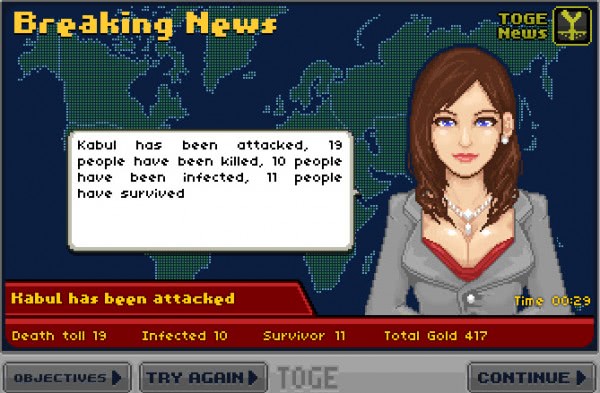 While you can select the locations where you spread the virus, place your special zombies and support items, you are not able to actively control the zombies once they are on the map.Once you have used up all your options, you can only sit back and wait until either your zombies manage to take over the city, or fail doing so. Zombies can spread the virus, first only rarely, and with upgrades more effectively. When they hit humans, they may turn them into zombies which in turn increases your chance to beat the level objective.

The game returns to the world map afterwards where you can spend the earned money in the lab to improve your chances to take over a city.

You will notice soon that you won't be able to succeed without buying upgrades and special zombies, as the virus on its own is simply to weak to in later levels. This means that you will have to try certain cities multiple times before you succeed in taking them over, or earn enough money to buy the next extra that helps you do that.

Certain extras become only available after you take over a city. This is especially true for special zombies which you need in later levels. The game itself is fun to play, especially in the beginning when you test extras and upgrades to see how effective they really are. Once you get beyond that point, you may experience some fatigue as you need lots of money to continue buying upgrades and extras.

If you like zombie themed games, or strategy games, then Infectionator 2 may be a game after your liking.Â  If you prefer action instead, I suggest you take a look at the Last Stand game.

Previous Post: « Pirateers Online Game [Game Saturday]
Next Post: « Why You Should Turn Your Game Consoles Off