What's Good and What's Bad About the Windows 8 Consumer Preview

I've had a good few days now to delve deep into Windows 8 and I've decided what I think is good, great, bad and awful about the OS.Â  I thought I'd share my thoughts with you.Â  Now I want to start by saying that I'm going to steer away from Metro, I've got another article about that planned for tomorrow and frankly this one things has been getting far too much attention and drawing the discussion away from other very important things within the OS.Â  So here is my list of just a few of the things that I think are good and bad about Windows 8.

It is very long past time that a full and effective virtualization client was built into Windows.Â  XP Mode might have had some nice tricks but it was clunky, based on very old technology and programming and frequently causes problems with logons to software.Â  Having the full version of Hyper-V, even though it will probably only be in the business editions, is a fantastic feature all round.

By far one of the best features in Windows 8 is the ability to take your settings and Internet Favourites with your to other Windows 8 computers.Â  I'm not talking here about Windows To Go, though that is very cool as well, but the desktop syncing that's built into the OS.Â  Sure there are some questions that need to be asked about privacy and security, but as a time-saving feature goes this is probably at the top of my list. 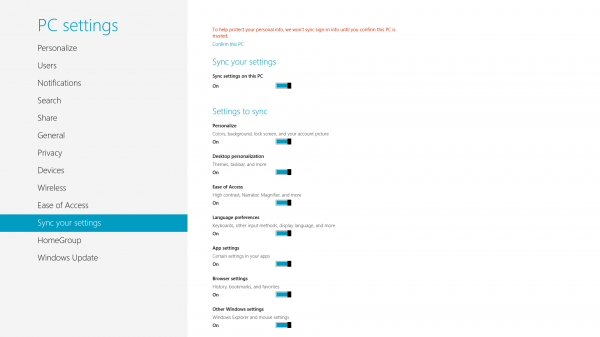 For years now Microsoft have been criticised for the ludicrous situation that comes with pressing "Start" to shut your computer down.Â  Now though despite a streamlining and a simplifying of the situation with Windows 7, not to mention the removal of the word Start with Vista, it now takes four mouse clicks to shut down your computer.Â  Sure there is Alt-F4 which will bring up a menu in which you can shut the machine down quickly, but four mouse clicks to access the standard shut down method is just too much.Â  To make matters worse, rather than press "Start" to shut the machine down you now have to enter "Settings".Â  Why is shut down and restart a setting?Â  These are no more settings than bugs that cause blue screen of death crashes are "undocumented features"!Â  It could be argued that Windows 8 isn't meant to be shut down, just put to sleep, but you still have to shut down mobile devices such as laptops.Â  Batteries don't stay charged forever.Â  Surely this is a silly and ill-conceived move.

Getting rid of the Start Menu is a brilliant idea in my book.Â  When Windows 7 first appeared I criticised it heavily as a half-way house, a bad way of working with the new and the old.Â  Why introduce a cool and efficient new way to launch programs when you're leaving the older inefficient one there too?Â  You'll notice that when Microsoft were justifying the new Start Screen to people they made no reference of launching software from the Windows 7 Taskbar, only the Start Menu.Â  The reason for this is that the Taskbar was a half attempt and still hasn't been fixed in Windows 8.Â  Icons should be buckets for software in the way folders in the Start Menu are.Â  You should also be able to pin specific programs in those folders too and software should auto-pin to the Taskbar when its installed.Â  Sadly we can still do none of this.

What I'm Missing Out

I've decided here to miss out everything that obviously should have been included before now, and these are usually things that made it into rival operating systems some times ago.Â  Each of them can be counted as a good feature though and I welcome their inclusion in Windows 8.Â  They include the Windows Store, File Versioning, Storage Spaces, Anti-Virus and Sharing.

So here is my short list of some of the things that are good and badÂ in Windows 8.Â  What's on your list?Â  Why not tell us in the comments below.