Find Out Exactly What Changed When Firefox Updates

Mozilla publishes release logs whenever a new version of the Firefox web browser gets released. These logs detail the most prominent changes and feature additions, but not everything that has happened in the background. There are also situations where no log is published, for instance when the beta, aurora or nightly builds get updated.

How can you find out about the changes in those updates? That's where the Current Pushlog extension by SÃ¶ren Hentzschel comes into play. It basically allows Firefox users to look at all the code changes that have been made since the last update of the browser. 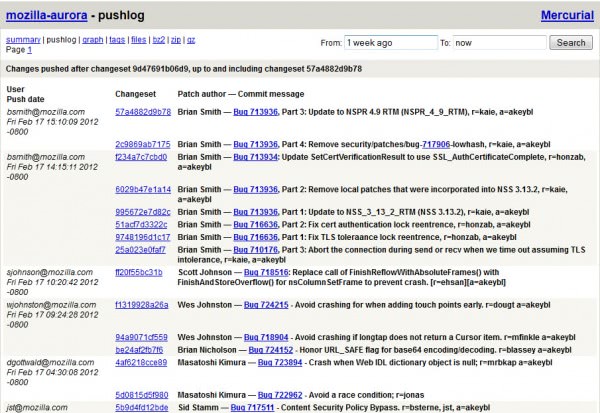 The web browser needs to update at least once after the installation of the add-on before the add-on's functionality becomes available. It adds a single icon to the Firefox status bar which, when clicked on, loads the pushlog entries in a new browser tab.

The changes are then displayed directly on that screen. Each change which a link to the changeset, the author's name, the push date and user, and the commit message. This message is often all that is needed to understand a specific change. Sometimes though it may be necessary to click on the changeset link to for additional details.

The actual code is displayed on those pages, which may make it hard for users without knowledge of the programming language to understand the changes that have been made.

The extension supports all major Firefox release channels. In particular, stable, beta, aurora and nightly, as well as ux.

Firefox users who do not want to install an extension can bookmark and open the logs manually as well. The extension is however more comfortable to use, especially if multiple versions of the browser are installed or used on the system.

Current Pushlog can be installed from the official Mozilla firefox add-ons repository.