Tabbed web browsers like Google Chrome, Firefox, Opera or Internet Explorer have specific orders in which tabs are opened and closed. Developers have to configure orders for opening blank pages and links as well as activation rules when users close tabs. The default behavior of most browsers opens blank tabs on the rightmost side of the tabbar, links to the right of the active tab and activate the last used tab after closing a tab.

Some users may prefer a different order of things. Someone with one hundred or more open tabs would not necessarily want a blank tab opened at the rightmost location of the tabbar as it is easy to lose the orientation this way.

Here are the available options:

As you can see, there are lots of options to configure the tab opening and closing behavior in Google Chrome. 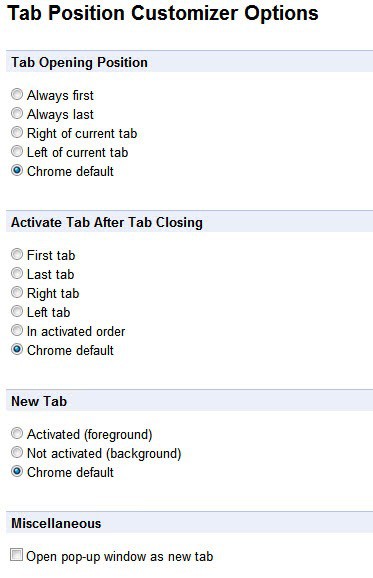 Chrome users need to open the extension's options via the Wrench > Tools > Extensions > Options menu first to make the changes to the tab behavior in Chrome. The changes made on the configuration screen are active immediately which is handy for testing purposes.

The Tab Position Customizer extension empowers Chrome users to pick the tab opening and closing behavior that they want. You may have noticed that the extension has another option under Miscellaneous which configures Chrome to open pop-up windows always as new tabs in the same browser window.

Chrome users can download the extension from the official Google Chrome Web Store.

Update: The Google Chrome extension is no longer available on the Web Store. The extension that comes closest to Tab Position Customizer's functionality is Tabs Plus.

Martin Brinkmann is a journalist from Germany who founded Ghacks Technology News Back in 2005. He is passionate about all things tech and knows the Internet and computers like the back of his hand. You can follow Martin on Facebook or Twitter
View all posts by Martin Brinkmann →
Previous Post: « How To Clear Individual Cookies In Google Chrome
Next Post: Google Releases Official Google+ Notification Extension For Chrome »