How To Remove What's Hot On Google+

Update: What's Hot is not displayed anymore in your stream. You can still access the feature with a click on the explore link at the top on Google Plus.

Google recently introduced What's Hot On Google+ on their social networking site. The new feature is linked on the Google+ sidebar under What's Hot and in the user's stream directly.

The most recent message of the What's Hot message pool is directly displayed in the stream. While it is possible to collapse the feature, it is not possible by default to remove or hide it on Google Plus.

What's Hot is basically a collection of popular messages and stories by other Google+ users. You find the usual assortment of images, videos, animated gifs and messages listed there.

The majority of hot items shared in the What's Hot section are animated gifs and funny images, nothing in particular what many Internet users want to see in their stream. All messages have in common that they have been "plused" and shared by a lot of users on Google+. Most users probably would not have a problem with the What's Hot feature if it was only listed in the sidebar and not injected in the user stream directly. 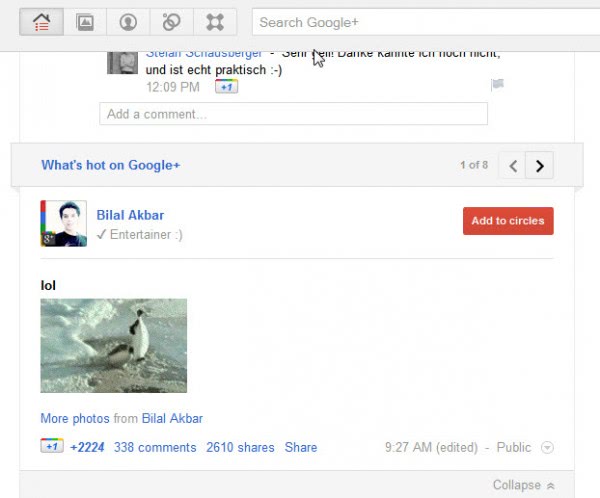 Some Google+ users have voiced complaints. Especially the lack of options to hide the What's Hot On Google+ feature has been mentioned over and over again.

Gabriel Vasile has posted a solution for Adblock Plus users. The browser extension is available for Google Chrome, Firefox and Safari. All that needs to be done now is to add two new filters to the extension to block the What's Hot on Google+ section.

This works as of now. Please note that it can stop working at anytime if Google decides to change the class IDs. I have not found a userscript yet to remove the What's Hot section on Google Plus. It is however likely that it is only a matter of time until one is released with that functionality.

Found another way to hide the What's Hot on Google+ section on Google Plus? Let me know in the comments.

Update: The userscript What's Hot... Isn't removes the What's Hot section in the middle of the stream while leaving the link in the sidebar. That's probably the best way of dealing with it and a great option for users who do not use Adblock Plus in their browsers.

Update 2: The userscript has stopped working. There is however an easier built-in solution available now. A click on the Hot on Google+ link in the left opens a slider at the top.

If you move the slider to the leftmost position you remove all What's Hot on Google posts from your stream.