Apple co-founder and the man responsible for making the company so successful in recent years has died at the age of 56.Â  Jobs had been suffering from pancreatic cancer since 2004.Â  He took medical leave from the company in January this year before handing over the role of CEO to Tim Cook in August.

In his resignation letter he said "I believe Apple's brightest and most innovative days are ahead of it. And I look forward to watching and contributing to its success in a new role."

In a statement about his death, Apple said "brilliance, passion and energy were the source of countless innovations that enrich and improve all of our lives. The world is immeasurably better because of Steve".

There can be little doubt of Steve Jobs' contribution to the world of computing and modern technology.Â  He was previously forced out of Apple by the then board of directors in 1985 but was brought back when the company was on the bring of bankruptcy in 1996.

After this time he spectacularly turned around the company's fortunes firstly with the iMac and then with the iPod.Â  Under his leadership, Apple reimagined a series of spectacularly failed products and made them hugely popular, capturing worldwide markets in smartphones and tablets.Â  At the time of his death Apple is firmly on top and is also currently the biggest technology company in the world in terms of value.

Jobs had a reputation as a forthright and very demanding CEO who knew exactly what types of products should be released and what they should do.Â  While many of his decisions have been criticised, including some business practices he instigated at Apple, there can be no doubt his contribution to technology is immeasurable.Â  This brusque attitude occasionally came to light though, at no time more obviously than the notorious iPhone 4 antennagate affair when he reportedly told a phone owner "don't hold it that way then."

It is the general public around the world who Jobs' work touched so much and there have been tributes pouring into Twitter, some of which are included below.

"You left your mark on our desk, on our ears and in our hands"

"You made the world a more interesting place.Â  A leading light in technology has been extinguished."

"It's sad to find out of your death from a device you created."

"He had the most gifted mind."

"Thank you for dreaming, believing and creating a world of infinite possibilities.Â  Your legacy will live forever."

US President Barack Obama said the world had "lost a visionary .Â  Steve was among the greatest of American innovators - brave enough to think differently, bold enough to believe he could change the world, and talented enough to do it."

Here is an inspirational speech he held in 2005:

Steve Jobs was born in San Francisco, California in February 1955 to a Syrian-born couple and was later adopted by a working-class Californian couple.Â  In his early working life he worked at both HP and Atari but he dropped out of college and travelled to India for a while where he studied Buddhism.

He founded Apple in 1976 with his school friend Steve Wozinack.Â  Other high profile companies he has owned previously include NeXT computer and movie animation studio Pixar,

He leaves his wife Lauren and three children. 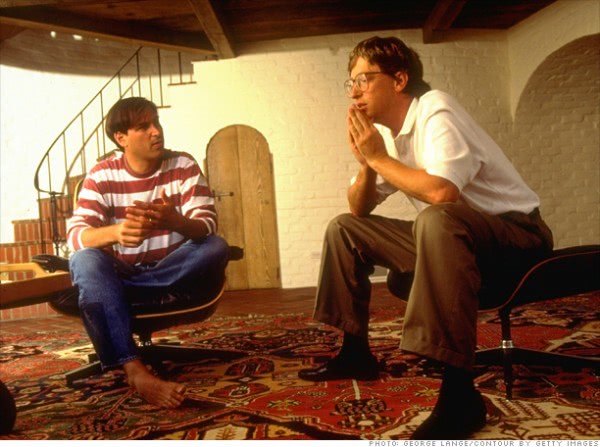