Fix For Hidden Add-Ons After Updating To Firefox 7

Mozilla notes on a newly created support page over at the official website:

There is an issue with Firefox 7 that may have caused some or all of your add-ons to be hidden.

Mozilla furthermore notes that the company is working on an update that will fix the issue and restore all hidden add-ons so that they can be managed again in the browser.

An add-on has been released in the meantime that fixes the issue for affected systems. The Add-on Recovery Tool - Firefox 7 is available at the Mozilla add-on repository.

All affected users need to do is to click the Add to Firefox button on the add-on page to install the add-on. This triggers the usual prompt to install or cancel the add-on installation. 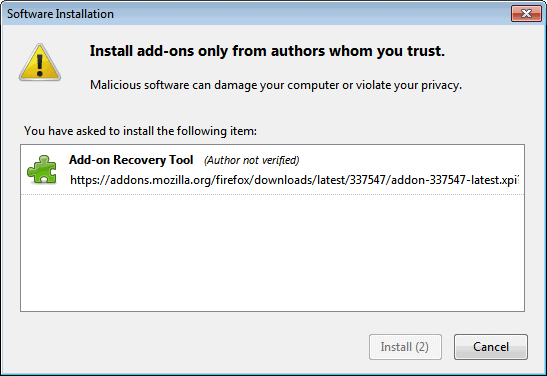 This triggers a Restart Firefox prompt. To restore the add-ons click the Restart button. You can alternatively click on Later to restart the browser at a later time. It is however suggested to restart right away to see if the add-on fixed the disappearing add-on issue.

It is very likely that Mozilla will post an update in the coming days to resolve the issue for all affected users and future users of the browser version.

Mozilla notes that users should not confuse the this bug with add-ons that have been disabled after updating the browser. Disabled add-ons should still be visible in the browser, while add-ons affected by the bug are not visible at all there.

Have you updated recently to Firefox 7? If so, did you experience the issue described here?

Update: The add-on has been pulled from the Mozilla add-on repository. It is no longer required as Mozilla has moved on to a new stable version of the browser.