One "by-product" of the rapid release cycle of the Firefox web browser is the version number increase that goes along with every new release of the web browser.

Firefox this year jumped from Firefox 3 all the way to the latest version Firefox 8, and we are not even at the end of the year.

Mozilla interestingly enough plans to hide the version number in the Firefox web browser. Asa Dotzler added an entry to Bugzilla to remove the version of the browser from the about Window dialog in the browser.

Firefox users who currently want to know which version of the browser they are running can click on Firefox > Help > About Firefox to find out. 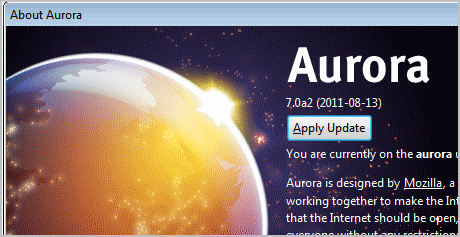 The original idea by Asa is to remove the version information in the about window and replace it with the more general information that the user is running the latest version of the browser.

When a user opens the About window for Firefox, the window should say something like "Firefox checked for updates 20 minutes ago, you are running the latest release."

Experienced Firefox users, or at least those who know where to look, can still access the version information on the about:support page.

What is Mozilla hoping to achieve with the removal of the version number listed in the about window? No information is posted on Bugzilla, it is however likely that Mozilla wants to reduce the impact a version number change has on the global community, and especially on the update ratio of users.

Removing the version number does not change the fact that Firefox is reaching what is generally perceived as major versions more frequently, and most tech news sites will still use the version number when they write about those changes. The idea is to make versions less important.

Mozilla is basically trying to use the argument that opponents of the major version increase had when they were first announced:

The opponents said that versions do not mean anything if the browser does not deliver, and that it does not make sense to increase the browser version if the changes are only minor.

Mozilla now says that versions do not mean anything, and that users simply should not look at them anymore.

Hiding browser versions, and the supposed change is nothing more than that, does not resolve the underlying issue. Especially not so if the update screen still displays the new version the browser will get updated to. (via)

Update: To clarify, Mozilla will only remove the version number from the about Firefox window, not from other locations, like the Troubleshooting Information page.

Update: Mozilla has dropped the plan to remove the version from the About window in the Firefox browser.

Martin Brinkmann is a journalist from Germany who founded Ghacks Technology News Back in 2005. He is passionate about all things tech and knows the Internet and computers like the back of his hand. You can follow Martin on Facebook or Twitter
View all posts by Martin Brinkmann →
Previous Post: « The New Firefox Permissions Manager
Next Post: How To Remove Ads On Google.com Search Result Pages »